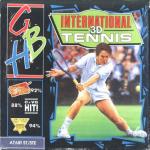 Now this is silly. Ostensibly a straightforward tennis game, International 3D Tennis is, in fact, a showcase for animated 3D triangle people to strut their stuff and stomp around like very thin Arnie Schwarzeneggers. You can view both court and players from any of ten different angles while you battle it out in a full game of lawn tennis. As usual, there is a plethora of options as tough opponents line up to thrash you - in the not-naughty sense of the word - in various famous tournaments. But that's not all.

Apart from the 3D perspective, the game's other gimmick is the variable level of control you have over both player and ball. At the most basic level your ST automatically moves your player to intercept the ball, while, at the other extreme, it gives you total control of everything then stands back and waits for your nervous breakdown. At vast expense, Sensible Software, the game's programmers, have secured the services of a very famous tennis umpire - his crisply-sampled tones call out the scores after each shot. But that's not all!

Actually, yes it is.

Underneath the smartly executed graphics lies a highly playable, though not very addictive, game. The joystick controls help the game flow along and your ST opponents vary from the good to the terrible. If you're playing against a friend, the tricky 3D graphics can create a few problems - the perspective gets confused when the ball approaches a player and it's all too easy to think you've returned a devastating volley when you've actually missed the ball.

This is not a game you can play for long. But, as a quick half-hour's entertainment, it's far superior to licking a cube of salt.

Underneath the smartly executed graphics lies a highly playable, though not very addictive, game. The joystick controls help the game flow along and your ST opponents vary from the good to the terrible.