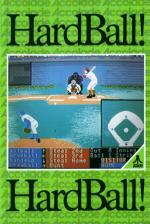 Hardball is the first simulation for the Atari of the very popular American sport, baseball.

On loading, a series of choices are presented, covering two player and computer versus player games. A management screen details team members and offers the opportunity to substitute men or move them about the field. Action then passes to the main screen which is split into two sections.

On the right is an inset diagram of the whole pitch on which the running men may be seen.

Each player chooses a batting or pitching method by using his joystick and pressing the fire button. The pitcher then chooses where to place the pitched ball and the catcher will move his glove to the relevant position.

The ball is pitched and the batter now has to try and hit it by choosing a direction with the joystick and swinging the bat by pressing the fire button.

If he hits the ball, a half view of the field appears showing the running men and the fielders chasing the ball. If he misses, the umpire will all Strike and, providing the batter has had less than three strikes against him, another pitch may be made. After three strikes a batter is out.

After three dismissals the whole team is out and the teams change over. The game ends when both teams have batted nine times.

Music plays throughout the game, and although you can't turn it off, there are several different tunes.

Graphics are brilliant, especially the movement of the pitcher. However it is very difficult to play at first, and takes several hours of practice to hit the ball regularly.

Graphics are brilliant, especially the movement of the pitcher. However it is very difficult to play at first, and takes several hours of practice to hit the ball regularly.