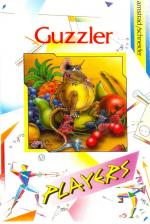 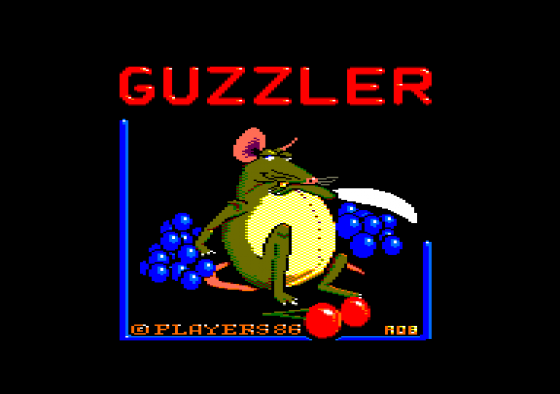 Just when computer users the country over were getting used to the idea of the mouse as a control device. Players employ a rodent as star in a maze game. At least I assume it's a rodent - Greedy Guzzler is never precisely identified.

Our mouse meanders through a maze in search of mouth-watering munchies, usually items of fruit, on which to gorge. It gets strategic too he has to get keys to unlock the doors behind which the delectable dainties lie.

As any conscientious consumer of calories will confess, overindulgence has its drawbacks. One tends to expand, enlarge, broaden - in short, get fat. This fate befalls our hero too, as after a good guzzle he just cannot squeeze through some of the gaps his previously sylph-like body used to traverse with ease.

This wouldn't matter so much, except that the maze in which Guz tends to the inner mouse is swarming with flocks (herds? shoals?) of Frobblies. You might expect the poor mouse to get the frobblies after eating all that fruit but it's even worse than that.

These evil beings have him on the run, for just one touch and he's had his last supper.

Fortunately (exciting, isn't it?) he has some bombs about his person. A remarkable mouse indeed. Just one blast from Guz's grenades can knock all the Frobble from a Frobblie for at least 10 seconds, during which time the greedy one can make good his escape.

That still leaves the problem of the obesity, for with all that adipose tissue aboard he can't bend down to get a key to get more food. And he's only got three bombs to start with anyway.

This is where Deflator Dennis (honest!), the Dieters Delight (I made that bit up) comes in handy. This tenticular terror wanders round the perimeter of the maze. Should Guz come into contact with him while fat the extra ounces will just melt away, leaving the rodent slim once more and able to go about his digestive doings.

But if the encounter occurs when Guz is thin, then it's just another way for the mouse to meet his maker. See, I told you it got strategic. And that's about the gist of it. Whoops, nearly forgot the last alliterative animal - Bonus Barry. BC) Baz pops up from time to time, bearing a letter from the word Guzzler. The first time he appears, the letter is G, next time it's U, and so on almost as exciting and imaginative as writing for ACU.

Should Guz meet Baz, the score (yes, there's even a score) leaps by 2000. If he fries a Frobblie with his bombs there's an extra 1000 in it for him. And guess what happens when a screen is eaten clean of comestibles right. Another one, with a different maze, appears to keep whiskers atwitching. And the whole thing's set to toetapping ragtime music. Quite delightful.

So, if you're a frustrated psychologist (most of them are) with a yen for behavioural studies who can't afford the kit for mice and mazes, watch 321. On the other paw, you could always give this game a trundle.

The worst thing about Guzzler is the name, it puts you off before you start. Still the loading screen makes up for that. Roland Rat eat your heart out. This is a game of timing and memory. Maybe after a few weeks I'll tire of this one but most games don't even get the chance.

The music is excellent and the gameplay very well implemented. Nice one, Players.

Look this is getting ridiculous. Readers are going to think that I've got a vested interest in Players if I keep giving their programs such good reviews. Guzzler may not have 30 frames a second solid shapes rotating flicker free with millions of other things going on but it is playable. So the game looks for all the world like PacMan. So it is only a budget game. So the sprites are tiny.

So what? It is fun to play, you can learn patterns and have to time things so that you spend as much time thin as possible. Brilliant.

Golden Oldie time this month. Tempest, and now PacMouse. One look at those thin blue walls, bumbling sprites and edible blobs and the arcadist from way back when will feel right at home.

Only the maze has been changed to protect the innocent (easier to spell than plagiarist). But to be honest, the game's strategy and details are a little different from PacPerson.

It's still a good bet that if you liked PacMan, you'll like this, and if not then you won't. Me, I quite liked that, and I quite like this. P.S. The music's good.

If you liked PacMan, you'll like this, and if you didn't, then you won't. 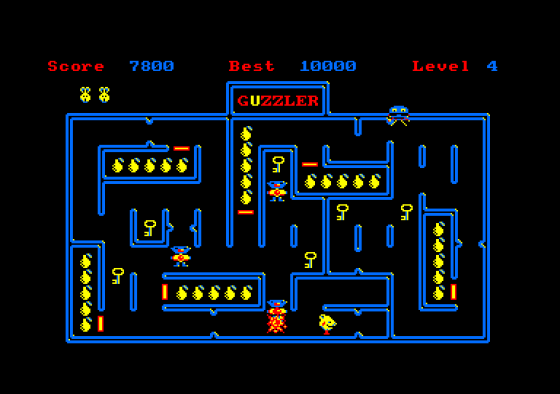