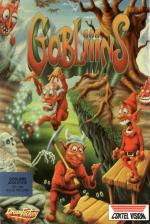 Gobliiins? What the hell? Massive cock-up at the printing factory? Dyslexic programmer? No, it's French. Gobliiins features three goblins, hence the three "i"s. (Uh, right.) The king goblin in Goblin Land has come over all sick and can't be cured by anyone. It's up to the three goblins to find Niak the wizard and get him to brew up a cure.

What this entails is the traversing of 22 separate screens, the goal of each being to move to the next. Each screen covers a specific location - for instance, the first is outside the wizard's house. The next screen can only be reached by using the objects present to remove obstacles or kill monsters. On the way, you have to collect the four ingredients for the cure. Each goblin has a different ability. Asgard the Warrior is the strong-arm of the team. He's great at punching - doors, rocks, buttons, anything. He's also the goblin to see if you want anything climbed - ropes, rock walls and ladders present no problem to him. Ignatus the Magician casts spells, so no change there - what the spells actually do depends on the object they're cast upon and where it is, though generally the object is transformed into something else. Oups the Technician can pick up, drop and use objects. You can't specify how to use an object - like the Magician's spells, the effect depends on the object and location. For example, you mihgt have to use Ignatius to transform a stick into a flute, then get Oups to play the flute next to a coiled snake. The snake then stretches out into a climbable pole, so Asgard can climb up it and get to previously unreachable areas. As you complete each screen, you're given an access code for it.

A bar at the bottom of the screen displays the group's energy. This decreases if you perform a wrong action or damage a goblin in any way. Goblins are easily scared, so even looking at something nasty can decrease their energy. As you progress, the bar gets so low that making one simple mistake can mean Game Over.

The puzzles are of the "Of course! It's so obvious when you know what to do" variety - that is, hard. You can't even be sure that you need to use every object on-screen - some are total red herrings. Experimentation is the order of the day - all the screens are solvable, but that doesn't make them any less frustrating.

If game plots were houses, Conceptsville would be a Milton Keynes of semis, lined up row upon row. But Gobliiins would be the strange house on the hill, a quaint, eccentric and endearing mansion.

Enough laboured metaphors. The point is that Gobliiins is a massively fun game and strikingly original to boot. Why hasn't anyone else come up with the idea of a series of static puzzle screens? And before you think it, Gobliiins is nothing at all like Lemmings.

What really carries the game is the quality of the graphics. From the screamingly funny intro to the expression on each goblin's face, they're faultless. Though small, the goblins have a huge range of animation: when they're scared, their eyes pop, their mouths elongate hugely (accompanied by a sampled scream), and they turn rigid. When you do something right, they all turn somersaults and grin broadly. Do something wrong, and you're greeted by three angry faces and much tapping of foreheads. Even while they're waiting for you, they tap their feet, juggle (badly), yawn and stretch out their arms with a blank look on their faces. Not only that, every sound effect is samples, and wouldn't be out of place in a Tex Avery cartoon. The only thing that lets the game down is the lack of longevity. Vicious brutes of puzzles though they are, the 22 screens can't possibly keep you going for two or three months, the period of enjoyment you might reasonably expect to get from a good game. Unless, as is all too possible, you become stuck on one particular screen. You've tried everything, nothing works, and you hate the damn game - but you're still determined to beat it. And when you do, the feeling of smug satisfaction that envelopes you is worth all the agony.

Charming, idiosyncratic and oozing with quality, and that's just the graphics. Forgo a couple of CDs this month and get Gobliiins instead. It is, as they say, the dog's - er, knees.

Charming, idiosyncratic and oozing with quality, and that's just the graphics. As for longevity, you try everything, find nothing works, and hate the damn game - but you'll still be determined to beat it.