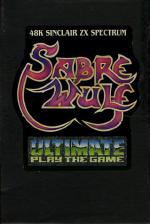 With each new release we wonder if Ultimate can pull it off yet again - and each time the answer is yes, they can. Though it shares similarities with Atic Atac, Sabre Wulf is original and difficult enough to warrant a place in anyone's software collection.

Sabre Man is armed with, amazingly enough, a sabre, and you are armed with an Interface II, a Kempston or any cursor controlled interface, or a set of nimble fingers.

Why does he need a sabre? To protect him from the nasties that patrol the jungle paths, and a malicious, hilarious bunch of creatures they are, ranging from little lizards to parrots with punk hair-styles and charging rhinos. The bigger they are, the harder they fall. Not even your sabre can deal with a charging rhino or hippo, while the natives are also distinctly restless and apt to clobber you in a clearing. The maze seems enormous, and with much of it made up of narrow paths a great deal of running away as well as fighting has to go on.

Also scattered around are various trinkets and treasures, which add to your score, though they're really incidental to the main purpose of exploring the maze and finding the medallion. Planted around the place are several different-coloured orchids: yellow ones make you rather sick, purple ones make your movement controls work back-to-front for a time, while blue ones give you temporary protection against all the jungle creatures.

But it's the graphics that make this game a treat. The cartoon-like way the little man moves is a joy to watch, as is the way he's catapulted across the screen to land on the seat of his pants, and later flat on his back when the last of his five lives is gone. The sound too is impressive, and the sheer scale of the jungle map is a challenge to anyone - even after many plats I haven't explored more than ten per cent of it. You're told what percentage you've scored at the end of each game.

Once again, Ultimate Play the Game is definitely the name of the game.

The graphics make this game a treat... Sound too is impressive... The sheer scale of the jungle map is a challenge to anyone.