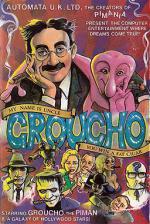 A Day At The Races | First Impressions | In Play | Verdict | Rating

Question: How do you follow Pimania, Automata's adventure that's been out about a year but which no one has yet solved? Answer: You come up with another game, but make it slightly easier.

Who could resist a loading screen that offers a picture of Groucho wriggling his eyebrows and waggling his cigar?

After dealing with the possibly familiar riddle, "A key turns the lock," you'll find yourself in Metroville with 200 cigars to your credit and your quest for clues begins. There are several towns to visit, such as Tinsel Town and Wrinkle City, and a section of each is drawn on your screen, usually a street front of bars, banks, cafes, hotels and so on. Most of these have a movie connection, such as Ricky's Bar or Marlon's Hotel, and your movie knowledge will be tested as Groucho insists on impersonating famous stars from time to time, whose identity you must guess from the clues provided, each one costing you two cigars more than the one before. With up to ten clues and no escape, you can get rid of a lot of cigars, though most of the names you should know and a correct guess wins you one of the 22 clues to the name you're really after.

Nothing is predictable, of course, and Groucho and the Pi-Man pop up all over the place, exchanging insults and knock-knock jokes, offering clues, stealing cigars, and there's even a guest appearance from Pac-Man, who's strayed into the wrong program. They must have used up at least 47.5K of memory storing bad jokes. Even when you've entered all the bars in all the towns in Groucho you can still keep going as you don't get the same result each time and clues can turn up anywhere.

The responses seem rather slow, it takes much too long for the game to get started once loaded, and the music leaves a lot to be desired. But apart from that, the game is great fun, the graphics simple but amusing, and you never quite know what response you're going to get.

Scott Adams it isn't, but Groucho is unique and will be an essential buy for anyone who enjoyed the nonsense of Pimania. After unearthing ten of the clues I have an idea who that mystery star might be... so on second thoughts, don't anyone else buy the game, I rather fancy that trip to Hollywood.

A Day At The Races | First Impressions | In Play | Verdict | Rating

Scott Adams it isn't, but Groucho is unique and will be an essential buy for anyone who enjoyed the nonsense of Pimania.