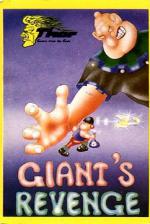 What goes up must come down. Thor's successful Jack and the Beanstalk had you climbing to the top of the plant whereas Giant's Revenge has you heading towards the root, through the hole left by the giant when he fell to earth.

The game has seven screens. Starting at ground level, you descend through various chambers to the giant's subterranean lair among the beanstalk roots. Each screen holds a valuable object which must be snatched before you can progress further. Various meanies scuttle around each chamber - and you have nothing but nimbleness to prevent you from being knocked into the abyss below.

The game can be played using the keyboard or Kempston joystick and also emits an assortment of spoken comments if you attach a Currah Microspeech unit.

At start-up, the game flicks through all the screen layouts, including the options page. Unfortunately, it skips through the latter so quickly, you barely have time to see what key you need to press to select the appropriate option (1 for keyboard, 2 for Kempston, in fact).

On screen one, Jack, a small yellow figure, stands outside his house at the foot of the beanstalk. Hanging about nearby are two unrecognisable but dangerous thingies. A ladder leads down a hole to a cave where two more beasties patrol. If you use the Currah Microspeech, you'll be told to collect the enchanted scroll which is lying centre-screen.

Jack can jump as well as move left, right, up and down. He does suffer somewhat from colour attribute problems, frequently leaving a blob of yellow in areas he has visited. The animation is not bad but controlling Jack is a pain. It's all too easy to blunder into a monster or fall off a ledge.

Other screens feature a stalactite and stalagmite-filled cave, planks across a lake, the giant's chamber and finally, the giant's lair, complete with giant (well, his head anyway). The backdrop graphics are the best feature in what is otherwise a pretty ordinary and awkward game. A non-runner bean.

The backdrop graphics are the best feature in what is otherwise a pretty ordinary and awkward game.