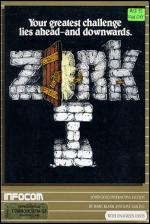 Have you ever heard of the Great Underground Empire? Do you know what a grue is? Can you name a microcomputer game that has its very own user group? Do you know what program a 1983 American readership poll showed to be the all-time most popular adventure? If you answered 'yes' to all four questions, then you'll know I'm referring to Zork. If not, twenty minutes of play with one of the adventures in the Zork trilogy will burn the name forever in your memory.

Although Zork I: The Great Underground Empire has been around for a while, only now has it become available for a wide range of micros, including the Commodore 64 and Atari. There are also two other programs in the series, Zork II: The Wizard of Frobozz and very recently Zork III: The Dungeon Master.

The trilogy is linked but any of the adventures can be played in isolation. The Great Underground Empire has you searching for treasure in a large labyrinth beneath the earth. Here you will be confronted with perils and situations from the mystical to the macabre.

The Wizard of Frobozz sets you in a long-hidden region of the Empire. Here the wizard rules with his magical powers which occasionally come unstuck. Some lovely touches of humour in this one, though danger still abounds.

Each of the Zork programs comes attractively presented in a bubble pack, containing the disk, a handsomely printed booklet giving the background to the adventure and how to get started, together with a reference card for use with your particular machine and a brochure on the Zork User Group. The group is an independent body, licensed by Infocom. They offer such goodies as books of clues, illustrated guide maps, a full colour poster, and badges.

Zork has a set of puzzles that will require more than a fair bit of common sense to solve. It is unlikely you'll successfully complete any of the Zork adventures in days.

Zork uses a far more realistic command structure than most other adventures. You can talk to it using sentences and multiple commands. For example, you could say "Take all but the knife and the lamp" or perhaps "Take the book then north. Drop book and candle". Questions can be asked using "What" and "Where". For example "Where is the gold?" or "What is a grue?" You can even talk to characters in the Adventure, e.g. "Tell the wizard 'READ THE SIGN'."

There are many possible routes to the successful completion of a Zork adventure. Problems may have more than one solution. They might not need to be solved at all, though it's fun trying!

Time passes only in response to your input so that if you want to spend a few minutes (or hours) pondering your best course of action, you may do so without penalty. Points are accumulated by gaining entrance to certain locations and for obtaining treasure. If you get killed, you can be brought back to life - you will lose points, though.

Like most good adventures, there are options which allow you to SAVE a game at a particular position and RESTORE it later, playing on from the point where you originally saved it.

If, when faced with a rather unpleasant looking tunnel, you prefer not to boldly go where no sensible man has gone before, then you will want to save the position before venturing further. You can always pretend you didn't really get killed by using the RESTORE command after the unhappy event. If you happen to get killed, there is always the possibility that Zork will bring you back to full health. However, it is unlikely to be in the same place and will cost you points.

Zork allows you to have up to eight differently named game positions at any one time. The program gives simple directions for you to follow when saving or restoring a game. The only drawback is that because of the way the program uses the disk, a directory listing will not show you what games you have saved. Each Zork adventure comes on a single disk which cannot be backed up. A pity but only to be expected. Infocom offers a 90-day warranty on the disk - if the disk becomes defective after the warranty expires, it will replace it for $15 provided the disk is returned.

The programs are not cheap but they are worth every penny.

The programs are not cheap but they are worth every penny.