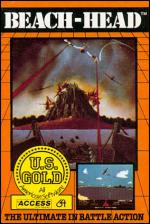 A new batch of games for your Commodore 64's edificationÃ¢â‚¬Â¦ uncanned by Bob Chappell.

A new batch of games for your Commodore 64's edification ... uncanned by Bob Chappell

Voted the best game for sound and graphics by US music magazine Billboard, Beach Head is an all-action war simulation. You don't have to worry about tactical movements of troops and supplies - this is a pure arcade-style shoot-'em-down game.

The game has several stages. The first, which is optional, has you manoeuvring your graphically-simple fleet through a passage. Or you can get straight into the real action on stage two - a defence against a seemingly quite inexhaustible squadron of aircraft. In the foreground are the twin-barrels of your anti-aircraft gun which you train on approaching planes. When fired, the fun recoils impressively. The enemy planes come at you from an aircraft carrier, anchored just out of range. The planes appear in detailed silhouette, swooping toward your position in a most realistic fashion.

The throb and whine of their engines, together with the thud of your gun, could almost be the real thing.

Survive this onslaught and the action shifts to another scene, where the enemy is lobbing shells your way. The scream of a shell and, if you're lucky, its splash and explosion nearby is enough to make your hair curl.

Stunning sound effects coupled with excellent graphics make this one of the best games to be released for the Commodore 64.

More action on the battlefront but this time you are up in the air. Flying Black Hawk, the world's deadliest fighter plane, you advance deep into enemy territory, knocking out tanks, anti-aircraft guns, helicopter gunships, rockets and heat-seeking missiles on your way to the enemy airfield.

Two screens are used, one for attack mode, the other for defence. The game automatically switches into the appropriate screen, depending on what hostiles are coming for you.

In the attack mode, your aerial position provides a panoramic view of the terrain - fields, railway lines, power cables, barbed wire fences, trees, etc. An indicator at the bottom of the screen shows the source point of your guided missile sight. Holding down the fire button and moving the joystick causes a cross-hair to move out. Releasing the button sends the missile on its course to the sight.

Defence mode is more the traditional shoot-up. You move your plane left and right while firing your cannons at approaching enemy craft.

The game has over thirty levels of play and always sets you off on a mission with a stirring snatch of The Ride of The Valkyries. The scrolling graphics are clean and smooth, and sound is used effectively. Recommended.

From combat in the modern age to the days of yore when horse power was literally just that. Pegasis (sic) sets you straight down in mythology for a battle between winged steeds.

The fight takes place against a Greek-myth backcloth, all temples and clouds. Pegasis, your white and winged horse, starts at the bottom of the screen.

With a whirring and flapping, and like Hell's Angels looking for trouble, Black Warriors astride flying back horses cruise the sky. Pegasis can topple a warrior only by swooping down on him; any other contact is fatal. Once a warrior hits the deck, Pegasis must stomp on him, or the beast will remount and cause trouble again.

Taking Pegasis for a spin requires a little practice and a fair amount of skill - thrust, direction, gliding and landing, all must be accomplished with reasonable precision.

An original and addictive game which, though lacking in variety, does provide a searching test of your aerobatic skills. Loved the graphics, especially those flapping wings.

Back to the present day but staying in the air: your mission this time is to wipe out a doomsday machine.

Most of the screen is the view from the cockpit of your fighter-bomber, with an instrument panel at the bottom.

Your target is a silo which houses the doomsday machine. Since the distance you must fly is beyond your fuel capacity, part of the mission involves an airborne rendezvous with a tanker.

What you see is mostly sky and land but the journey is far from uneventful; enemy defences include fighter planes, anti-aircraft fire and ground-to-air missiles. When one of these is in range, a cross-sight appears and you can pot away. You also have bombs on board - once you've dropped them, the game's over, mission accomplished or not.

You can play the game on several levels or even set up your own. The customise option lets you decide distance to target, number of bombs, vulnerability, etc - an admirable feature.

The graphics are fairly simple, though the instrument panel is a joy to behold - crystal clear detail and beautifully set out. The impression of movement and speed given by the scrolling view is very good.

The impression of movement and speed given by the scrolling view is very good.