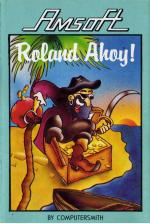 I must say the Roland theme is beginning to wear a bit thin. This latest epic from Computersmith has him as the Captain of a pirate vessel trying to avoid mines (a strange anachronism), collect gunpowder, blow a hole in the harbour bar, collect treasure, and deposit it in a secret cave. It's all rather involved, but fairly obvious once you start playing.

There are four main screens - the main one is the map which shows Golden Harbour and Powder Quay along the bottom, with the rather square island above containing Treasure Cove.

Using either keyboard or joystick, you manoeuvre the good ship Falcon to Powder Quay to pick up your ammunition.

When you dock, the scene changes to depict the quay itself.

A cannon starts discharging its contents in your direction and, unless you avoid the cannonballs and collect your ammo quickly, a fireball will sink your vessel.

You will need to make several visits to Powder Quay, as the harbour bar will take eight consecutive hits before yielding a hole large enough for the Falcon to pass through. When you do reach Golden Harbour (a third screen), the locals are no friendlier than at Powder Quay and bombard you with further missiles.

If you manage to steal the goodies without being hit, you will need to plough the Main again to reach the 'safety' of Treasure Cove.

Here you may deposit the goods, providing you can avoid the falling rocks and a malicious green spiker, angry at being relegated from a game of Pacman. A pirate's life is not an easy one...

And that's really the problem with this game; the concept's interesting enough, but you have to do an awful lot to earn your pennies. If you hit anything either ashore or at sea, the harbour bar is automatically restored and you have to start from scratch which can be very frustrating.

The graphics are very mixed, with the boat and mines particularly poor, but the scene at Golden Harbour is nicely put together.

Roland Ahoy! walks the tightrope between addiction and frustration none too confidently.

The graphics are very mixed, with the boat and mines particularly poor, but the scene at Golden Harbour is nicely put together.