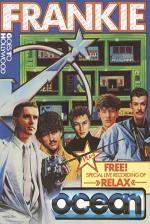 Thankfully, Ocean haven't adopted the Broad Street 'game of the Band' approach that Argus recently gave to the McCartney effort. Rather than requiring you to know everything about Frankie Goes To Hollywood down to what colour underpants they wear, The Pleasure Game attempts to encapsulate the FGTH view of things.

You are a total blank. Rather like the body on the billiard table in Invasion Of The Body Snatchers, you lack any semblance of personality. Your social and political awareness is zero, you are an intellectual cripple. Don't take it personally, that's simply the initial state of your animated character counterpart.

To begin with, you will find yourself in a street with four houses. There are four streets in all, making a total of sixteen houses. The eventual objective of the game is to find your way into the Pleasure Dome. To do this, you must build your character's personality until he becomes a complete person.

This is accomplished by entering the houses and searching the various rooms for objects and clues. In some cases simply picking things up will gain you pleasure units, at other times they're harder to come by. For example, there's a whodunnit type murder mystery to solve. Was it Mrs. Straight, Joe Public, Miss Mundane, or someone else? It's hard to fathom out as the murderer constantly changes.

Intermingled with the adventure play are arcade screens. The way in which these are implemented is something else. In a couple of cases, they start out as pictures on the wall. Touching the picture causes it to expand to screen size and the action begins. There are about half a dozen of these, including a shooting gallery - take pot shots at some infamous politicians, and a moonlit flower garden where, like a demented Morrissey (sorry, wrong band), you must catch the blooms as they fall from the sky.

My favourite, although not graphically superb, is a shoot out (gob out!) in which Reagan and Gorbachev spit at each other from opposite ends of the screen.

Successful completion of an arcade screen, or finding the right door, lands you in the Corridors of Power. This is a 3D maze through which you must wander shooting fireballs. It's worth blasting the fireballs whenever possible as this opens up new sections of the game for you to explore.

You are periodically informed as to how complete a person you have become and this information is also given graphically in the form of a bar chart at the side of the screen. When you become a 100% complete person the letters BANG appear above the bars of the graph. I was impressed by the deep significance.

If you get this far you must find your way into the Pleasure Dome, but this can only be done if you have completed all the arcade screens and picked up all the right bits and pieces in the right order. Tricky, huh? All this is, of course, accompanied by the strains of Frankie pouring forth from the telly speaker. Surprisingly, the music is out outstanding; the only thing I recognised was Two Tribes.

The big questions is will The Pleasure Game be as big a success as its musical counterpart. At ten quid it's a little over the odds for a game, but then there's a lot to it and it's very well put together. I predict chart-topping success.

I predict chart-topping success... There's a lot to it and it's very well put together.