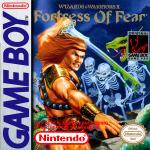 Also known as Wizards And Warriors, Fortress Of Fear follows the story of Kuros, an iron sword-wielding warrior determined to destroy the Wizard Malkil and rescue the Princess Elaine from the fortress of the title.

Set over four levels, Fortress Of Fear is a horizontally scrolling platform arcade adventure (phew!), with Kuros defeating foes, collecting keys and gems, and leaping from platform to platform. The keys open chests which reveal spells; these have effects such as healing, protection and invincibility. Other items include Boots or jumping - for getting to those out-of-the-way places - food and drink for restoring health - and extra lives for extra lives!

This is something of a disappointment, simply because the excellent graphics are ruined by the bad blurring caused by the scrolling. It's a shame, as otherwise Fortress Of Fear is of a high quality, combining strategy with arcade action. I'd say it's worth checking out if you like this sort of game, but bear in mind the blurring.

It's a shame that this features such blurry scrolling, because otherwise it's a great game. The difficulty level is nicely pitched and there's plenty of challenge. Give it a go.

It's a shame that this features such blurry scrolling, because otherwise it's a great game. The difficulty level is nicely pitched and there's plenty of challenge.