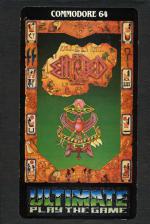 Another sequel, this time to Ultimate's highly rated Staff Of Karnath. Like its predecessor it features the gentlemanly explorer Sir Arthur Pendragon, a kind of cross between an aristocratic Indiana Jones and Michael Wood of In Search Of The Trojan Wars fame.

As before, he has to search for things in this consuming maze game. This time, though, he has got himself in a bit of a mess whilst searching for the ancient Egyptian Eye of Osiris. He awakes to find himself incarcerated in an underground labyrinth of rooms and corridors with no obvious way out. To begin with you find yourself in a room where two giant statues slide together barring your way through the door every time you move towards them. Before you go anywhere you've got to get out of there. If you don't do it quickly enough you'll run out of air.

That's just the first screen. Once you get outside, there are a multitude of rooms and hazards which await you. Just how many rooms there are, I don't know, because Ultimate won't tell me and I haven't completed it yet.

The rooms are linked by corridors lined with hieroglyphics. Torches flicker on the walls and as you make your way along them bees, mosquitos and birds fly off the walls and plague you. The 3D high-res graphics throughout are horribly lifelike. Other hazards include a wandering mummy and a scorpion that makes such a vile scuttling noise that it makes your flesh creep. You'll need the whip to deal with these because if they touch you they sap your lives - depicted at the bottom of the screen by Ankh symbols. The whip isn't that far away and if you give them a taste of it they'll disappear, but not for long.

Your only aids are the whip (bit too Indyfied for my liking), a torch to guide you in unlit rooms, and your ability to jump. A message inscribed on the cassette inlay gives you cryptic advice, the crux of which is the line "Search out the scrolls, they hold the key". So you know what you're after. Work your way through the rooms collecting the clues and that will eventually provide you with a solution.

As far as I can tell not every room contains something of use or leads somewhere useful. There are lots of red herrings and dead ends, so mapping your route is fundamental. If you don't there's a good chance you'll repeat the same mistakes every time you go back to the beginning, or just stumble blindly, running into snakes and beetles. If it helps, you can pause the game whilst you write a few notes. Messages appear on the screen very briefly so it's a good idea to pause them as well.

Entombed is another classic arcade adventure that'll keep you at the computer for hours. It has all the ingredients of another hit for Ultimate, and if you'll excuse me I must go or I'll never get out of here before it's time to go home. Whipcrackaway!

Another classic arcade adventure that'll keep you at the computer for hours.