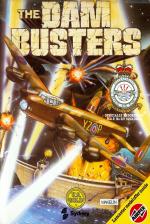 From one WWII epic to another, in this case the exploits of Guy Gibson, et al, of 617 squadron over the Ruhr valley.

This puts you in control of a whole crew aboard a Lancaster. There is the pilot - with the out-of-the cockpit view - from which you control the direction and pitch of the aircraft with the joystick, the front gunner - also acting as bomb aimer - the tail gunner, the navigator - who plots the optimum course to target, avoiding high concentrations of flak, and so on - and the engineer, who must nurse the engines all the way across Europe. All on-screen controls can be accessed via joystick controlled cursor.

Co-ordinating all these screens can get horrifically difficult, requiring one whole load of concentration, particularly on the actual bombing approach to the dam. Adjust your airspeed via the engineering screen by juggling with the throttles and boosters, start the bomb spinning, adjust height using the bomb aimer screen, watch out for the flak, check that you are on course - pilot screen - and use the distancing sights to know when to finally release the bomb. And that's only if you made it across Europe in the first place!

To make things a bit easier, you are given three options on start up - practice dam approach, English channel - when you begin in flight over the great divide - and the full squadron leader option, in which you have to take off first. Take my word for it, whatever option you choose, it's not gonna be easy, pal.

To fit so much in the game, compromises had to be made - in this case, graphically, but very cleverly. The mission was a night flight - so the surface of the land is represented by a series of yellow dots - obviously the blackout wasn't rigorously applied on the Continent. Despite the sparseness of the display, it's very effective.

Unlike Spitfire 40, the game isn't played realtime - that is, it doesn't take three hours to get to the target.

The actual feel of the plane is suprisingly real - I liked this one a lot.

You'll find yourself getting right into this one. Goggles down and chocks away!