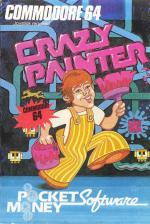 Normally on "Painter" games, you have to zip round a grid avoiding chasers summoned up from the depths of the author's imagination. Here you have to coat the entire screen through eight levels of difficulty while suffering from the attentions of meddlesome oafs. Each creature or object will spoil your handiwork in a variety of ways. Dogs plough through, bubbles burst and splatter away a sizeable chunk while worms... well, worm their way erratically across pristine top coats. There are also paint-pot and brush nickers hell bent on preventing you completing the eight screens. While this is going on, a continuous medley is churning out from the SID chip.

Not the most exciting of games to be sure but it is different and well worth the asking price especially to our younger brethren. 'Cheapies' often reflect state-of-the-art of two years previous which is okay if it's a simple game you're after.

Looking at the titles available for the Dragon it is hoped that Steve Bak will convert a few for the C64 to gee up the budget market further.

Not the most exciting of games to be sure but it is different and well worth the asking price especially to our younger brethren.