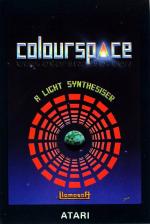 The first couple of issues of Atari User carried an advert for Llamasoft's Psychedelia.

Let's get one thing clear from the start. Colourspace is not a game, unlike the rest of Llamasoft's catalogue. It's what Jeff calls a light synthesiser, a software toy.

It's also nigh-on impossible to describe.

If you can imagine an etch-a-sketch connected to a multi-coloured special effects generator, you might be on the right lines.

You "play" it with a combination of the joystick and keyboard to produce incredible coloured displays.

They can be whirlwind rainbows or cool waves flowing endlessly - it's up to you.

As Jeff points out in a glowing eulogy to Atari machines, all this is possible because the display list can tell the Antic chip to build any number of screens.

The idea for Colourspace grew out of Jeff's interest in rock music and the light shows that accompany rock concerts of the Pink Floyd/Genesis type.

A very comprehensive manual accompanies the tape. It's written in the distinctive Minter style - "imagine that the cursor is a telepathic metagoat" - but actually does describe all the many controls with which the parameters are set or manipulated.

I must admit I didn't read the manual at first. I glanced through while the program was loading and then played for quite a while.

I then kept dipping into the manual to discover a new variable and immediately try it out.

The crowd that gathered around sounded like kids on a bonfire night. Lots of "oohs" and "aahs" with a liberal sprinkling of "How does he do that?"

My daughters enjoyed it even more. It has all the compulsiveness of a kaleidoscope with all the fun of being able to tweak the controls. You can even record a sequence of about fifteen minute's worth in memory and play it back as an endless loop, or record the parameters and joystick/keyboard dynamics to tape and load them back in at a later date.

Quite simply, Colourspace is magnificent. It's Atari graphics at its best, and no hippy should be without it. Nice one Jeff - really zarjaz.

Quite simply, this is magnificent. It's Atari graphics at its best, and no hippy should be without it.