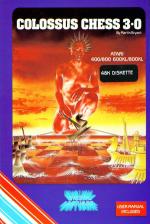 English Software are not what you'd call modest about their Colossus Chess 3.0 package. In all their literature, and even in the manual, it's billed as "the best chess playing program for Atari computers". Maybe that only makes it a big fish in a small pool, because there aren't that many alternative chess programs for the Atari.

However, before I see how it would fare in the bigger pool that includes other micros, let's look at what it offers.

I find this much easier than the more common "e2-e4" format. However, if you want to do it that way, the program will allow it.

As chess programs go, this one is very comprehensive. I'll consider its standard of game later, but the extent of its features is very impressive.

An enormous variety of levels can be selected by varying the amount of time the program has to select a move. Full tournament mode can be selected or you can play an all-the-moves game in which the total game time is specified.

You can even introduce a handicap for the program (or yourself if you're that good) by putting some time on one of the clocks before the game starts.

There's "equality" mode in which the program will try to keep its clock as close as possible to your own, so if you can move quickly you can force the program to do the same.

There are plenty of other features too, like the replay faciltiy enabling you to see how the game got to its present state. A useful tutorial feature is the "legal moves" option which will show all such moves for any piece selected.

The program can also be used to set up and solve chess problems, and not just the usual "white to move and mate black in five moves" type.

It claims to be the first home computer chess program ever to be able to solve selfmates and helpmates, and as far as I know the claim is true.

On features alone then, it's probably fair to say that Colossus is the best chess program available for the Atari.

The manual gives a good description of all the features and how to use them, and fully describes all the different sections of the screen display.

In fact, there's only the manual that I found to criticise. The content is fine, but the presentation is awful. It's printed in black on red paper - not a pretty sight.

It looks to have been photo-reduced to A5 size from A4 dot matrix printer output, which doesn't help, and you'll need a magnifying glass to read the loading instructions!

To consider whether the program is anything more than a big fish in a little pool we need to look at the standard of its game.

Rather then describe in detail how the program tore me to shreds, which doesn't say much, there's a table at the end of the manual which gives the results of Colossus v The Rest.

The program was tested against over 20 other programs on a variety of machines ranging from the ZX81 to the Apple. Against each one a series of sixteen games was played on various levels with an equal number of whites and blacks for each program.

Colossus beat them all - most of them by sixteen games to nil. Sargon III, widely recognised as an excellent program, went down 10-6. Parker Chess, another Atari version, went down 12-4, while Atari's own version lost 16-nil. White Knight Mk II won only three of its sixteen games.

About a year ago Colossus Chess 2.0 for the Commmdore 64 was advertised as "the finest chess program ever written". I'd have been interested to see how 3.0 fared against its predecessor.

Since both were written by Martin Bryant we can assume that 3.0 would win... but by what margin? How much improving can he do?

As the manual points out, the same set of results could not be guaranteed in every set of sixteen games. Nevertheless, even if the results are taken as only a rough guide, they show Colossus to be up there with the best of them.

Colossus Chess 3.0 comes on 48K cassette or disc, with prices of £9.95 and £12.95 respectively. To call it the best chess program for the Atari might just be damning it with faint praise!

Colossus says it is the best chess program available for the Atari. And it is.