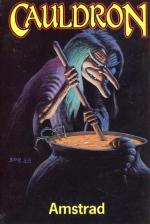 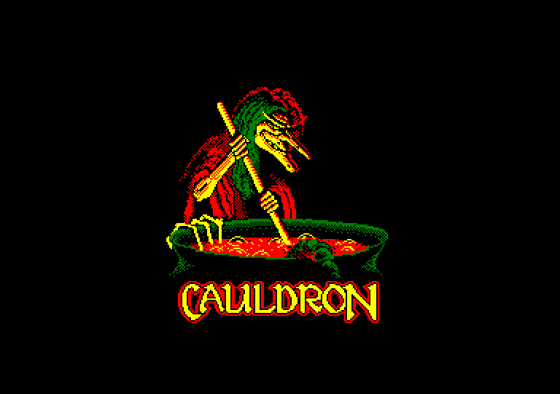 Double, double toil and trouble,
This beats turning rocks to rubble.
Cor! A semi-poetic review,
I should know, I've seen a few.
There's rhymes like this,
Written on the cover.
I saw them there,
So I wrote another.

It's all about witches you see, not the ones that hold meetings inside the wire at Stonehenge, or the mumbo-jumbo Dennis Wheatley types, but the old-fashioned Halloween sort; complete with the spikey hat, broomstick, warts, hooked hairy nose etc.

The idea is to collect the various ingredients for a really tasty stew: like the stuff called 'soup' in the vending machine: Juice of Toad, Wing of Bat, Hemlock Root Shakespeare might have been a great bard, but he was a lousy cook. 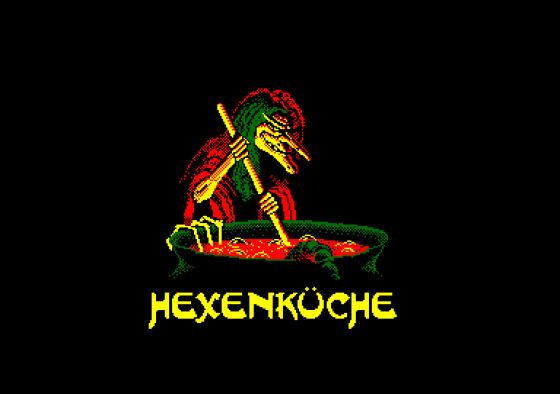 The spiel starts you off with an impressive, colourful piccy of a whole load of wonderfully tasteless bits failing to crawl, slither or otherwise escape out from a cauldron. This is being leant over and stirred by a witch who bears more than a passing resemblance to one of the dinner ladies at my old school!

To get through the game you get ten old hags with a supply of magical energy. The energy can be replenished by flying through a sparkling point on the screen that is not entirely unlike the sparkling bits over the cauldron in 'Sorcery', if you see what I mean. This time though, you don't get 'orrible cauldrons that like sucking your precious energy out.

"What knocks down your precious energy then?" I hear you ask. Well, many things! Flying about on the broomstick, throwing spells about, contact with various nasties and so on. 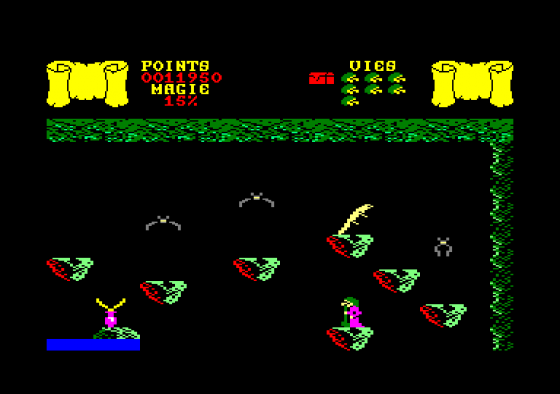 Nasties? Oh yes, I almost forgot. As you fly through the various rocky and wooded landscapes or seascapes, things lurk below. They soon get it into their little heads or fronds) that they are hungry and want a sandwich, but any old witch will do, including you. There then follows much casting of spells, cursing, swearing, snapping and gnashing of joysticks as you try to tight them off. Not easy doing this while dodging the trees, and frequently fatal to old hags.

Animated antagonists litter the aerial scenes, and I hope somebody cleans up after them. The creatures range from bats, to albatrosses (a Kensington seagull), airborne Venus flytraps and fireballs. OK so a fireball isn't a creature, but you get the idea.

Landing points, hags; for the use of, are strictly controlled. You can only come down on level bits of land, collide with the scenery and another one bites the dust good name fora song is thati whilst doing cartwheels and assorted injuries. These landing things have to be regulated or hags would be coming in every witch way to land, wouldn't they?

Collecting a key will let you through a door (logical isn't it) and in to a sort of platforms and ladders job with many skull and crossbones, spooks and other unsavouries, Most of these are out to turn your witching hour into a brief witching thirty seconds. 'Tis unpleasant to be grabbed by the ghoulies.

Hopping lightly from platform to platform with your trusty broom, you sweep through the maze to find the delicacies for the broth. Some platforms move. If they do and you don't, minced witch.

The sound ain't nothin' to write home about, and mostly consists of zaps and pings with the occasional squeaky floorboard noise thrown in as an attempt to sound like a cauldron being stirred.

The game uses ye olde XORed graphics routines, the quickest easiest, most fool proof and probably the messiest way of doing sprites that there is. Fortunately, you can get away with it if you have characters and backgrounds as lively as these. The overall effect is not far short of the old Sorcery. I likes it.

A likeable game. It uses ye olde XORed graphics routines, which are the messiest ways of doing sprites that there is. Fortunately, you can get away with it if you have characters and backgrounds as lively as these. 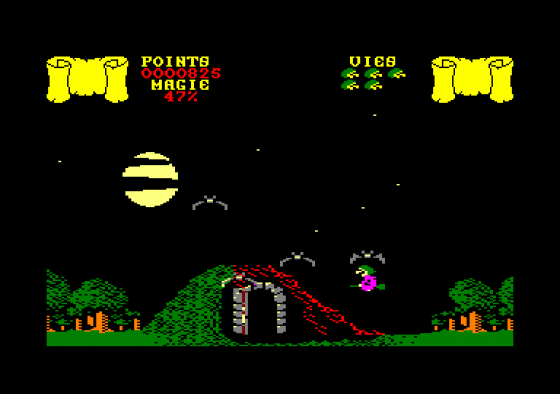 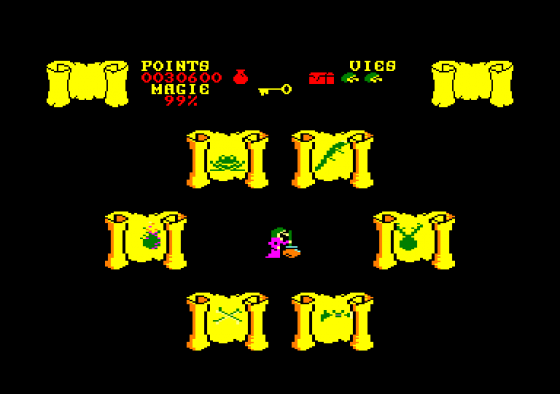 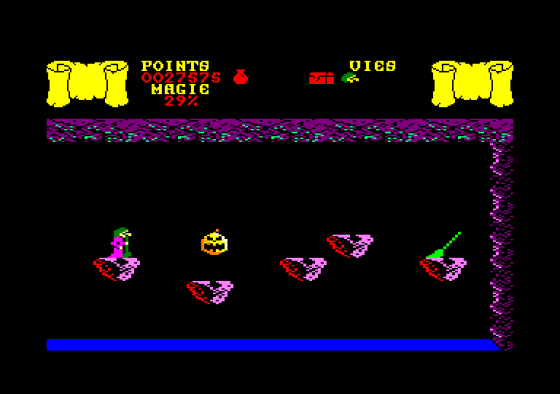