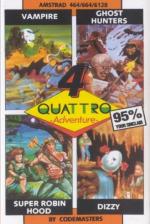 All the lowdown on CodeMasters' superb Quattro series in this month's penny-saving section.

Have you ever had one of those days when you've played every single game in the house to ribbons, you're desperate for more action, but you know you're down to the last of your pocket money? I know I have, and it's certainly not nice.

Thankfully, you need worry no longer. With CodeMasters' ever increasing series of Quattro packages on the market, you can now get four sizzling hot games for the price of a cream tea!

For sport freaks, look no further than Quattro Sports, an excellent combination of two and four wheel race simulators, as well as some skiing and snooker thrown in for good measure.

Grand Prix will have you and a friend racing around fourteen cunningly devised circuits against the clock, while the BMX Simulator puts the toughest to the test over the bumps and ramps of seven wicked courses. Catch the action replay and slo-mo options for wacky results.

Staying in the great outdoors, match your skills against some of the fastest downhill ski slopes you could imagine. It's just like the real thing. However, for the more sedate at heart, you can also take time out for a concentrated attack on the green baize of the snooker table.

The more robust amongst you might prefer the rough and tumble of Quattro Power, featuring dirt biking action at its best in Moto X, day and night racing in Twin Turbo V8, wheelies and spins in the ATV quad racing simulator and a chance to blow your friends to pieces against the rocks of the superb Pro Powerboat challenge.

Yes, all that in one budget priced package can't be bad, can it?

Quattro Adventure will have you leaping and jumping and pondering puzzles a-plenty, and includes the classic smash Dizzy. Swashbuckle abounds in the legendary tale of Robin Hood, while for lovers of ghoulies and ghosties, there's more than enough to keep you happy in Vampire and Ghost Hunters.

Last but not least in the Quattro tally to date is Quattro Combat. This one has got to be a must for shoot-'em-up fans, if only for the sheer variety of zapping and blasting to be had in the sky and on the ground.

Get to grips with your firearm in Death Stalker and SAS Combat, try out a few moves oriental style in Ninja Massacre, and then take your jet fighter for a spin, or engage in a howling dogfight in Arcade Flight Simulator.

Whichever of these marvellous packages you choose, you can rest assured that your money has been well spent. Each of the games is produced with CodeMasters' usual style of excellence, with superb graphics and unbeatable playability value, but if I were forced to pick my favourite, it would have to be the Adventure collection; the appeal of our little egg-shaped friend Dizzy is just too strong to ignore.

Apart from that, be sure that with this little lot on your shelf, you need never worry about rainy days again.

With this little lot on your shelf, you need never worry about rainy days again.
Logout