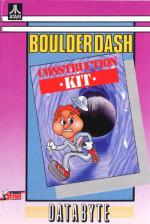 BoulderDash Construction Set is the ultimate challenge to fans of the relentless Rockford, as well as for newcomers to the rock pushing, critter crushing, diamond collecting world of BoulderDash.

The hero is the one and only Rockford who must push his way through the dirt and boulders of critter-infested caves to collect the required number of diamonds that will reveal the exit.

There may be as many as 99 diamonds or as few as one but either way you will need your reactions and brain in top gear to solve each cave.

They are packed with such hazards as boulders that fall when you dig out the dirt from under them, fireflies and butterflies that are deadly to the touch. Added to this is a growing amoeba that threatens to swamp the screen.

You will also have to guide Rockford through indestructible walls, expanding walls and walls that turn boulders into diamonds - but you'll have to be quick to collect these.

This is the fourth in the BoulderDash series and features caves that are fiendishly difficult. The flies and boulders combine to form a few near impossible routes to the exit.

But BoulderDash IV is only half the story. The other side of the game tape features an easy-to-use, joystick-controlled construction set.

By building up caves from the joystick selected components you can create your own BoulderDash games and make them as challenging as you like by adding hidden doors and extra Rockfords that do nothing except cost you a life if they're destroyed.

You can then test your creations until you've got the timings and gameplay exactly right before saving your caves to tape or disc.

The antics of Rockford pose a unique mixture of strategy and skill that will challenge both beginners and addicts alike.

The antics of Rockford pose a unique mixture of strategy and skill that will challenge both beginners and addicts alike.