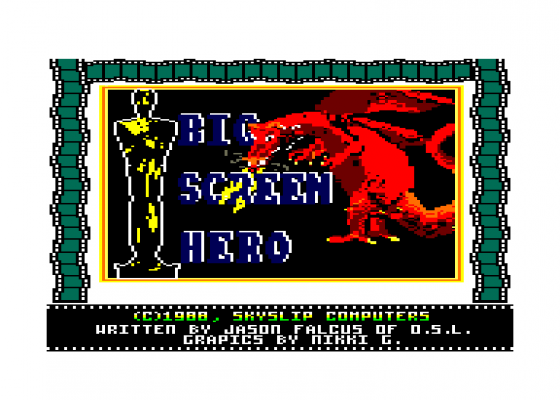 You have been hitten by the Hollywood Gold bug and have hiked your way out West to to make it big like Eastwood, Karloff, Keaton, Ford and countless other shining stars.

You try to convince the director, one Hiram N. Firem, that you areworthy of the company's best movies. Mr Firem, having seen so many young hopefuls fail to follow up their words, consigns you to the bargain basement where low cost rip-offs are made. The ICBM Co. Inc. is famed for films like Star Battles, TE (Terrestrial Extra I and Spookbusters, all of which scraped a profit. 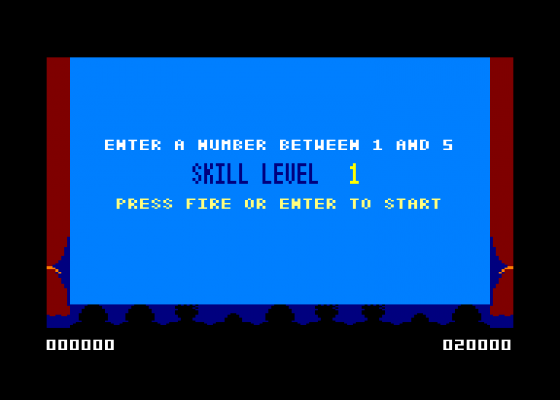 The first film in Big Screen Hero is a Tagliatelle Western, aptly named Clint Bites The Dust. The action scene involves shooting lots of Red Indians who lob tomahawks at you if you miss.

You can buzz left and right, space invaders fashion, and shoot off as many rounds as your carbine can handle. The Indians come at you in 3D from dawn to dusk and all you have for shelter is an overturned carriage. Not quite a role for Olivier, but a start. Hiram N. Firem must have recognised natural talent, because next you are playing the lead in a horror movie, Frankenstein Meets Dr. Jekyl (sic).

Having taken the potion, Dr Jekyl (still sic) finds the house full of Frankenstein monsters, and the only way to get rid of them is by collecting all the little pills that are scattered about the floor, while the Frankensteins chase slowly after you. Not light years away from Pac Man, but it does have a nice line in digitised laughter.

The next film is a silent thriller - The Sawmill Massacre (PG). The evil sawmill owner has tied your bestand-only girl to the slowly advancing sawmill table. In best beat:ern-up tradition you must spar with the evildoer, knock him Out and stop the saw to prevent your girl from becoming a large stain on the woodwork.

The final film in the quartet is an all-expense-spared adventure movie. You play a dashing palaeontologist, Ginger Bones, and must make your way through all odds in the horrific Caverns of Doom. Arrows fly at you, large bouncing things bounce at you, drips drip on f'ULJ, and the dragons drag on after you [Groan - Ed].

This is the toughest film yet. It will need many takes to get right - frustrating because you've got to go all the way back through the other three films to get to it.

Only guts and determination will get you through Big Screen Hero to win an Oscar. Although there is nothing outstanding about this game, it manages to be mildly addictive. It is not the sound, nor the graphics, both of which are there in spite of themselves.

It's a fun wee game that suffers very slightly from being overpriced. Tinseltown may be paved with gold, but through the glitz there is pure grit.

It's a fun game... Tinseltown may be paved with gold, but through the glitz there is pure grit. 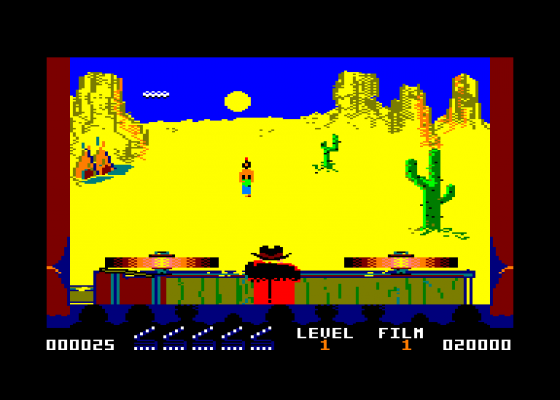 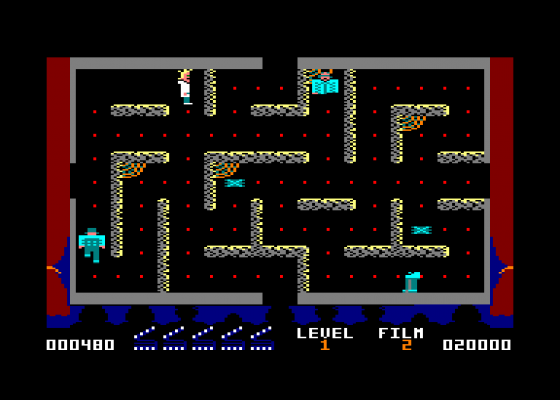