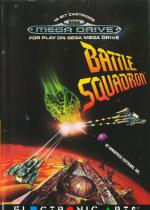 Earth has been at war with the evil Barrax Empire for hundreds of years. Millions are dead, and not many people are very happy about it. Two such people are Commanders Berry D Mayers and Lori Bergen. After a successful battle mission, they have been kidnapped by the Barrax Empire on the return journey to Terrainia - and it just so happens that they're being held hostage on the flag ship of the Barrax Empire's battle fleet.

Enter the player (and his friend, if he's got one). They've risen to the challenge of busting out Bergen and Mayers and travel along the vertically scrolling worlds of the Barrax Empire, destroying the enemy battle fleet in their search for the hostages.

There's a huge variety of enemy craft in the fleet, and arcade shoot-'em-up skills are tested to the max if you choose to take on the enormous fleets of fighters and even more enormous mid-level and end-of-level guardians!

Various weapons power-ups have been strategically placed along the path to the hostages. Simply blasting the carrier ship unleashes a coloured pod. The colour changes at regular intervals. Effectively, you choose your weapon by picking up the pod when it's at the colour you want.

Each fighter also comes with a supply of smart weaponry. When fired, a huge amount of fiery bombs travel around the screen, destroying everything in its path! Additional ammo for this weapon is occasionally supplied.

The Barrax Empire has a huge amount of different craft in its attack ranks. In amongst the hordes of death-hungry aliens you'll even find invisible craft that try to ram your craft!

Don't worry though, a shimmering field is visible and their cloaks falter when they're shot at. But the Empire has other surprises in store for you. In one round you must travel down an enemy trench - with a huge amount of guns occasionally popping out to take a pot shot at you!

Battle Squadron also features some of the most diverse end-of-level guardians found in a Megadrive shoot-'em-up.

Battle Squadron is unique amongst the mass of Megadrive shoot-'em-ups by having an option that enables two players to take on the might of the Barrax Empire. Elements of competition are added as players chase the power-ups!

But if the game seems just too difficult in one-player, the front-end of the game includes an option to reduce the amount of enemy bullets, give more lives, more credits or event reduce the enemy bullets' speed!

1. Red Equips the ship with a spray weapon. Deadly red photons issue out in a cone form in front of the ship. Powers up into a more rapidly firing weapon encompassing a larger area.

2. Blue Forward and rear laser bolts are attached to your craft if you collect a blue-coloured pod.

3. Green Massive green front-fire accompanies the pod. When it's powered-up, it's the best full-frontal attack weapon.

4. Orange Another front fire pod, but also fires side laser bolts at the enemy when it's upgraded. Very versatile in the thick of battle.

Although Battle Squadron has the option for simultaneously two-player blasting and a full screen to its credit, there's a couple of major let-downs that stop it from being a terrific game.

First of all, the extra weaponry is dull and uninteresting compared to the likes of Truxton. Your joypad is also likely to wear out because a rapid fire option hasn't been included.

The sound is a bit disappointing. Apparently, Rob Hubbard was contractually bound to copy the Amiga version's tunes and they're not really suited to the game at all - this strikes me as a real waste of Hubbard's talent.

Battle Squadron is still a very addictive game with excellent graphics. I just think that the potential of the game has been fully realised. Try out Hellfire for the ultimate Megadrive blast.

Sporting some stunning graphics, this is one of the most attractive Megadrive blasters around - the backdrops and sprites are excellent. It's not just a pretty face, either - it's tough too, especially when you play it on the single-player option.

The odds are really stacked against you, with a huge amount of enemy craft all with their sights locked onto your ship - if you don't grab some power-ups quick (and hold on to them) you don't stand much of a chance.

Personally I love this sort of situation, but there are some people in the office who found the high difficulty level really off-putting. Check it out if you're a hardened blasting fan.

Presentation 91%
The game is very well presented, with plenty of options. Nice presentation screens as well.

Graphics 91%
A nice variety in all the backdrops and sprites.

Sound 72%
Decent enough effects, but the tunes are slightly lacking.

Playability 87%
Plenty of really decent shoot-'em-ups thrills on offer - shame about the extra weapons though.

Lastability 81%
The two-player option keeps the thrill-level high, and in the single-player mode there's plenty of long-term challenge.

Overall 85%
A tough and addictive vertical scroller, which could have done with some better power-up weapons. Recommended to hardened blasting freaks.

A tough and addictive vertical scroller, which could have done with some better power-up weapons. Recommended to hardened blasting freaks.