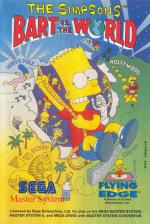 Attention, good people everywhere, be on the lookout for a strange family with yellow skin and wild hairstyles. The Simpsons are off on a trip around the world!

Gosh, aren't they lucky? The Simpsons have won a competition and their prize is a special Krusty the Clown treasure hunt which takes them through many different countries, collecting tacky Krusty merchandise as they go. If they find all the special items they're in for a big surprise - but it isn't a nice one!

You see, this treasure hunt isn't what it seems. It's a sinister plan created by the owner of Springfield nuclear power plant and Homer Simpson's boss, Montgomery Bums.

He has relatives all over the world (who look just like him!) and they hope to put an end to The Simpsons. By popping off the family, Burns would save his power plant the thousands of dollars it costs to repair Homer's endless bodges.

Bart Vs The World isn't just another run-of-the-mill platform game. Just as the holiday isn't all it seems, there's more to Bart's latest adventure than meets the eye.

There are platform sections to complete to move further around the world but in between are all kinds of sub-games for extra lives and Krusty bonuses. Fruit machines, card games, sliding puzzles and a Simpsons trivia quiz are packed in to break up the monotony and make this cart a must for fans of the hit cartoon series.

Through the levels, Bart encounters all the members of Mr Burns' strange family. In China there's Fu Manchu Burns and his gang of merry cohorts. Bart gets out his trusty skateboard and trundles down the Great Wall of China, using bottle rockets, cherry bombs and firecrackers to improve his chances of survival.

The Abominable Snow Burns lives at the North Pole and the game finishes in Hollywood, where famous film director Eric Von Burns has special effects up his sleeve for our yellow-haired hero.

There's something about Bart Vs The World that doesn't appeal to me. Don't get me wrong, I'm a massive fan of The Simpsons, but this game's lacking that extra something to make it a Master Blaster. I think the main problem is that the first few levels are just too tough for the average games player.

The platform levels are nothing out of this world (even though Bart's going around it!) but the sub-games make playing worthwhile. All the well-known characters from the TV series have been used and they all look brilliant. Krusty the Clown introduces everything and you get to see Ned Flanders the next-door neighbour, Moe the bartender and Bart's friend Millhouse.

Fans of this famous ail-American family will love playing these mini-games but probably fall asleep while playing the platform levels. Bart Vs The World has a strange mixture of difficulty settings. One minute you're flying through a level, the next you're stuck fast and don't know what to do - and that's just or the first part of the game!

If you're looking for an addictive platform game - and who isn't? - this probably isn't for you, but Simpsons fans should find it worthwhile. 89%

A few years ago, a little lad with blond hair, silly shorts and a whole host of colourful phrases captured the hearts of millions of satellite TV viewers. Without making it sound too much of a Disney tribute, Bart Simpson and his crazy family - Homer, Marge, Lisa and Maggie - were stars all over the world. You'd see their faces on everything from pencil sharpeners to vacuum cleaner bags.

There've also been a succession of games based on the antics of Bart and Co over the last two years, and now Bart Vs The World finally makes an appearance on the MS. It's basically a series of tricky puzzles like annoying slide puzzles, card games etc set all over the world.

If you're into The Simpsons and puzzle games, you'll love it, but to anybody else Bart Vs The World can appear very lame. Graphically, it's not spectacular enough to show the colourful cartoon characters to their full potential. The same goes for the sparse sound - so sparse, in fact, that I doubt you'll be able to remember much of it.

The whole game's a little boring for my tastes but certainly hard going, another thing which put me off. 78%

A good-looking Simpsons adventure with excellent sub-games but lacks lastability.

A good-looking Simpsons adventure with excellent sub-games, but it lacks lastability.