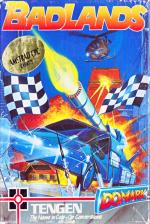 Racing has never been this ruthless!

The nuclear holocaust is over and it seems that what was left of civilisation went with it. What are we left with? A ruthless, sadistic bunch who think Formula 1 racing is about as primitive as the Ark.

The idea of Badlands, as faithfully converted from the coin-op, is basically to race hell-for leather around eight very different tracks, against computer drone cars or a friend, making sure that you reach the chequered flag first every time.

That all sounds simple enough and, when you take on the opposition on the City track, life is easy enough. But, just you wait til you progress.

Just like a real coin-op, you need credits to play and, one of the nicer touches is the option for a friend to buy in at any stage between tracks. However, fail to finish first in any stage and you lose a credit.

On each track, be it the slippery-slidy oil refinery or the burning hot desert or volcano, you need to win to pick up the golden spanner, enabling you to buy extras for your souped up motor.

Choose wisely in the spares shop, as you need to know when to buy special tyres or a turbo boost to suit each round.

Of course, if you don't feel like being so refined about it all, make good use of the gun and missile launchers on your racer. There's nothing more satisfying than watching an opponent go up in flames in front of you and it also buys you a bit of time if you've been unfortunate enough to run into one of the many deadly obstacles on the course.

Each time you win, your firepower can be enhanced and, as the difficulty level increases and the opposition gets more hostile, you're going to need everything you can lay your hands on to succeed.

So much for the gripping scenario. The gameplay itself is fairly smooth and the movement of each racer is well controlled, the only problem being that they are a trifle small on the screen and a touch on the basic side.

Badlands is certainly more challenging as a two player game, as the drone cars tend to be a little inept on the earlier stages, so don't expect to be torn from your seat from the outset.

That said, there is more than enough variety in the racetracks to make Badlands well worth your credits.

The gameplay itself is fairly smooth and the movement of each racer is well controlled, the only problem being that they are a trifle small on the screen and a touch on the basic side.