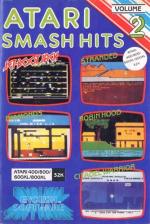 English Software has released three volumes of Atari Smash Hits, but we've only had Volume 2 and 3 sent for review, so I won't be saying much about Volume 1!

All three volumes contain Jet Boot Jack, probably the best-known of the games. In fact, if you haven't already got Jet Boot Jack it might be worth buying one of these volumes to fill the hole in your collection.

In addition to being a good game, it has several features which other manufacturers would do well to copy, like the facility to set the skill level and the option to skip lower levels.

As well as Jack, Volume 2 contains four other games to keep you amused. They're not all arcade games either.

Stranded is an adventure game in which you play the part of Special Agent Sid - even if you are a woman! You've been dumped on a strange planet and your mission is to return home safely.

The game uses fairly simple line drawings on the top half of the screen, with the location descriptions and commands appearing on the lower half.

There's a Help facility if you're stuck, although the hints aren't always very useful, and the game can be saved and reloaded at any point.

Meanwhile, back at the joystick, Diamonds cats you in the role of Digger Dan the prospecting man. Your task is to collect all the diamonds while avoiding such characters as Brian the Blob and Phil the Filler.

There are sixteen levels so it will keep you busy for some time. There's a pause facility which I found essential so I could have a wrist-rest, because the game seems to be very slow at reading the joystick - as though it's written in Basic! This resulted in my applying extra pressure, hence the need for a break.

The Adventures Of Robin Hood is not actually an adventure game. Robin's task is to collect the bags of silver and kiss Maid Marian while avoiding the arrows of the Sheriff's men.

He moves along a horizontally scrolling landscape and has an amazing ability to climb up trees and buildings. As the levels increase, so do the number of bags of silver to be collected. The skill level can be selected.

I must admit I got bored very quickly with this one, despite the interesting Olde English computer music.

Citadel Warrior, the last of the five on Volume 2, is a two-dimensional scrolling maze which you must explore in order to defuce the cyclotron bombs. Since only part of the maze is visible on the screen, you've got to remember where the fuel dumps are.

Your fuel is used up at an alarming rate - a bit like driving a Range Rover. Also, coming into contact with the walls uses more fuel, and there are security robots to avoid.

It's a familiar theme, reasonably well implemented. The only thing which spoiled the game for me was the fact that when you come in contact with the wall, the whole screen judders. After a while, this had a horrible effect on my eyes. Still, I'll play it a bit and risk one eye!

After the obligatory Jet Boot Jack, Volume 3 gets underway with Airstrike 2 (by Rocket Raid, out of Scramble). Unlike some versions, this one gives you a limited supply of missiles and bombs.

It's a good game if you like that sort of thing - which I do. What a pity the demo mode cheats by flying through every obstacle, otherwise you might have gleaned some hints on strategy. Still, it's nice to see what evil awaits you at the farther reaches.

Battle Builders was a delightful surprise since I hadn't encountered it before. It sounds simple - you have to build a wall by catching bricks as they fall off a conveyor belt.

However, to be successful requires speed, accuracy and some strategic thinking. The bricks drop quite fact and are deadly if they hit you. In order to catch them, you must be directly below with your arms raised.

There are four shades of brick and in order to maximise points you must build the wall in a set pattern. If you don't throw the bricks accurately, they don't always end up where you intended and may well spoil the pattern.

You must also consider the pattern in deciding whether to catch any particular brick, or be quick to move out of its way.

On level 1, you only have the bricks to contend with. On higher levels - there are eight altogether - there are boxes of TNT moving around your legs to make life difficult.

The TNT makes level 2 a lot harder than level 1 - I would have preferred a more gradual transition between levels. Even so, it's still a good game.

By including Breath Of The Dragon, Volume 3 uses a technique borrowed from the record industry. It's not uncommon for a 'greatest hits' album to contain one previously unreleased track, so why should software houses be any different?

The game is a sort of adventure game but requires arcade-type skills. You are trapped in the inner circle of a double maze which you must explore in order to find enough provisions to see you through the outer maze - always assuming you can find the door.

The dragon is just one of the hazards to be avoided as you roam around. The walls and ceilings are fatal to the touch, as are the mobile false teeth, the giant spiders and other assorted nasties.

It's one of those games which take a while to develop as you learn the various skills - like jumping over the rubbish without hitting the ceiling.

The instructions leave you to work out the various possible movements and it was a while before I realised I could lie down... not like me at all!

Once you get the hang of it, there are six selectable skill levels to keep you busy into the night.

Finally on Volume 3, Neptune's Daughters await rescue by an intrepid aquaman who absorbs oxygen "through the gills on the side of his neck". I suppose if you're going to have gills, you might as well have them there.

You are armed (or should I say finned?) with an unlimited supply of harpoons with which to do battle. The foes include sucker plants, an octopus which only gets stunner by the harpoons, and killer amoebae.

The action obviously takes place off-shore from Sellafield because the amoebae are as big as the aquaman himself. Biology aside, though, the game is challenging enough to be fun.

The cassette version of each volume cost £14.95 with the equivalent discs being £17.95. Of the two volumes I've looked at here, I prefer Volume 3 and would consider it much better value. It contains five games that I'd play again, which works out at about £3 a game on the tape.

I'd only go back to four of the games on Volume 2, but because it contains a "traditional" adventure it might well appeal more to some people than Volume 3. Either way, you pay your money and you get a fair bit of choice.

Of volumes two and three, I prefer volume three and would consider it much better value.