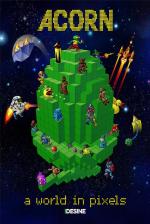 Acorn: A World In Pixels

Brrrr-Beeeep! That was the sound of one of the Eighties' most powerful computers springing into life, and Acorn: A World In Pixels is a 468 page celebration of Acorn Computers. Acorn, as you may well be aware, produced the iconic BBC Model B and Acorn Electron computers, and took on Sir Clive Sinclair for dominance of the home computer market.

The ensuing drama even made it to the big screen in 2010 in the form of Micro Men, which starred Alexander Armstrong as Sir Clive and Martin Freeman as Chris Curry, Acorn's founder. This book, however, is not a retelling of the same story.

Indeed, it's a rather difficult book to categorise. The care with which it has been put together gives it the feel of a high-end art book. It's hard backed, with a dust cover and an integrated bookmark, and every page has a matte finish. It feels, and it looks, very classy. Most pages are black (as you might expect considering most BBC games had black backgrounds) and are peppered liberally with screenshots, posters and recommissioned artworks. It's a montage work, a collection of articles that chart the rise of particular companies that published games for the BBC, a few anecdotes and surprising revelations about those who worked for them, and a few 'remastered' reviews from the magazines of the time.

In my opinion, it's aimed at those who already own and play BBC and Electron games. People like me. And therefore I think it's great. It's got a lot of contributions from a lot of key people in the Acorn world, and the stories they tell reflect a time gone by that I remember with slight sadness at its passing. However, not all of the content within it is "new". It's chock-full of games, but they are rendered in an artistic rather than a critically appraised way. A typical page might show you a map, or a loading screen, and be accompanied by a few lines of text from the man who wrote it, an interview or a review that said something positive about it when it was released. The book is designed from beginning to end, to evoke that warm, fuzzy nostalgic feeling associated with familiarity. You see a game in motion, you're transported back to your bedroom and how much time you used to spend playing it, you recall how free you were, how young you were... Then you read one of the interviews on the subsequent pages and you think "Wow! I never knew that at the time!"

My only real criticism on that score is that the big stars of the Acorn World: Repton, Exile and Elite get huge spreads, but, as someone who has already digested many articles about them already, there wasn't a lot of new information. A few times I started reading an article only to realise I had read it before somewhere else.

But that's a small point. This is really about the only book that I have ever read that is so good at eliciting a true sense of love for an era of gaming gone by. There's literally nothing else like it. So if you're a fellow BBC games fan you probably need no further convincing. Its non-linear structure makes it easy to dip in and out of, and the bookmark included means you can even pick up from where you left off without worry. Go get it. You'll love it.

However, if the world of Acorn Computers is unfamiliar to you however, I have to confess I am a bit more ambivalent in recommending it. So let me pretend I know nothing about the BBC or Electron for a few moments and give it a thorough once over.

The first issue I see is that you might well look at the book's comprehensive contents pages (6-7), and assume a consistency of reportage across all of the games it includes. However, while you can pick a game at random there - everything from Jetpac to Jet Boat! - and flip to "something" about that game, some lucky dips reward you with a wholly new interview (for example, Xor (page 309)) whilst others are just regurgitated magazine content (for example, Green Beret (pages 314-315)).

Secondly, if you use this book to introduce yourself to the world of Acorn, you would come away with the impression that every game included is brilliant. The reality is, of course, that is not the case. The lack of any critical appraisal here makes it difficult to divide the wheat from the chaff. There's also nothing about collecting games for the BBC, so you find very rare games like Cyborg Warriors just displayed across two pages in a rather non-contextual way. Whilst I understand why this has been done - to evoke an element of either recognisance and/or surprise! - I presume to the uninitiated, it just looks like a big screenshot taking up two pages, with no details on where to get it and/or download it from.

On the same point, it's probably fair to conclude that the majority of BBC gaming is done these days via emulation rather than on the original machines. Yet there's no exploration of this - indeed, there's not even a cursory list of the different BBC and Electron emulators available. There is a small section at the back on the homebrew scene, but it fails to mention many of the big releases of the last few years, perhaps giving the (misleading) impression that very little development for the BBC is currently going on.

Certainly there is a lot of content but, in line with its artistic approach to the world of Acorn, you get the impression that publishers Idesine have stuck with only aesthetically pleasing games within that world. One of the biggest genres of BBC/Electron gaming - text adventures - therefore merit no mention at all. Well, apart from Twin Kingdom Valley, clearly because it has beautiful pictures that can be reprinted. Also, notwithstanding how lovely the illustrations are, I can foresee some people finding the detail into which a few of the articles go pretty boring.

Sometimes, games are even illustrated with a loading screen alone. Alright, Spy Hunter has a nice loading screen, but it doesn't convey the information about the game that an in-game one would. And where are the sections on the User Groups that supported the BBC back in the day? Just off the top of my head I can think of four: Beebug, Solinet, 8BS and EUG. Between them they published hundreds of games that also don't figure in Idesine's world at all.

Whilst I appreciate that Idesine had to draw a line somewhere, and there is always going to be something that someone (i.e. me) is going to see as an omission, it's arguable that such content could have been included on one of the 'wasted' pages that appear throughout the book. Again, because it has been rendered in a very artistic fashion, there are whole pages where the text starts only halfway down the page, leaving a huge unused area crying out for a cover scan or screenshot. There are double-page spreads with a starry background and the words CTRL-Break (or some such) in BBC Mode 6 text. In my copy, page 270 and page 429 were completely blank.

Another small point is that some pages are quite difficult to read unless you sit by a window. Black text on a royal blue background is one offender, although less than 1% of the pages that have this problem. More seriously, throughout the book, the line height is not generous, making the heavier text pages seem somewhat cluttered. I personally think a newcomer would find watching the movie Micro Men a lot more illuminating than ploughing the first eleven pages of heavy, humourless, prose.

These aren't serious criticisms though. It's just important to be aware of what the book is (an art book with articles), and what it is not (a comprehensive annual like this one), before purchasing.

I have read a lot of books on retro computing, and this is, without a doubt, one of the most unique and beautiful books I have ever bought. At £30 including postage (to a UK address), it's also really amazing value. It's presumably called 'A World In Pixels' because that's exactly what it uses to illustrate the games, and it includes so many of the most revered that I can't possibly give a full list in this review but rest assured your favourite BBC game will be in there, along with some of the most comprehensively researched articles, beautifully re-rendered posters, screenshot maps and illustrations that I have ever seen. So if the idea of having (almost) the whole Acorn world in your hands, hop over to www.idesine.com now.

Acorn: A World In Pixels

The whole Acorn world in your hands... Rest assured your favourite BBC game will be in there, along with some of the most comprehensively researched articles, beautifully re-rendered posters, screenshot maps and illustrations that I have ever seen.