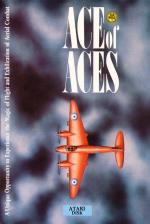 Chocks away Giner, and it's out into the wide blue yonder blasting the odd German ME109 fighter as we play Ace of Aces, the new World War II flight simulator from Accolade - an American company which trades in Britain through US Gold.

After the initial loading sequence you are presented with a very attractive title screen and the strains of Land of Hope and Glory with machine-gun fire accompaniment.

In the nicely animated briefing room, you are faced with the choice of a real mission or a practice flight.

This is indicated by the Group Captain pointing at a board with a stick. Using the joystick, you move the stick to your selection and press fire to make your choice.

The practice option offers you dogfight, train or U-boat - and I strongly recommend it to enable you to become accustomed to the controls.

Mission offers you the choice of train, U-boat, V-1 bombs or bombers. After you have chosen you will receive your intelligence report which will give you details of your target, the weather, recommended weapons you will need and your orders.

Once these have been taken in, you go on to take a look at a map of England and France which shows your location - mid-Channel - the position of your target and all major cities.

After this, you must load up your Mosquito maverick fighter with bombs, rockets, fuel and cannon shells and prepare to take off.

This is indicated by a series of black and white freeze-frame photos of a klaxon, running feet (presumably yours), the propellor whirring away, the chocs being pulled away and then you waving goodbye from the cockpit. This very original idea adds considerably to the atmosphere.

Next comes another boring loading sequence, which when you have a tape version is exceptionally tedious.

Finally, after nearly 25 minutes, you get airborne. The game uses a split screen with the view from the cockpit showing white clouds rolling the wind at the top.

If any any point during the game you double click the fire button, the screen will switch between the pilot's, engineer's or bombardier's view of the aircraft. Using the same technique you can also view the map you saw early on.

Unfortunately, this way of selecting views can pose some problems. When in a dog fight with a German plane it is very easy to double click the fire button at the wrong time.

As you look bewildered, at these unwanted views or at the status screen - brought up by pressing the spacebar - the Germans can still fire at you and you can do nothing about it.

Also some joysticks have difficulty responding to the double click, so it would have been better if Accolade had the keyboard controlling this function. I found this a very hard, if not impossible game to play as no indication of your status is available to you without viewing the appropriate screen.

Accolade could have at least displayed a short message when your plane catches fire or your navigator gets killed. Having said this, the graphics are excellent. There is a wide variety of styles, from cartoon figures in the briefing room to the still-frame photographs as you prepare to take off.

It's a shame that such a potentially good game has been spoiled by a poor choice of controls. There is a nice use of sound throughout ranging from Land of Hope and Glory to the Last Post when you die, and the sound of klaxons when you take off is nicely implemented.

Overall, I found it very frustrating. The loading time from tape is ridiculous - far too long to sustain interest. And when you finally start flying, you can't really last very long against an enemy who can fire at you while you can't fire at him.

However, the game shows potential and it is always nice to see American software in Britain. It would be good to have more trans-atlantic games made available.

As simulators go, Ace Of Aces is one of the best I have seen and definitely up there with the leaders.

If you have the patience of a saint and a very low blood pressure this is the game for you. All said and done it is well worth the price.

As simulators go, this is one of the best I have seen and definitely up there with the leaders.