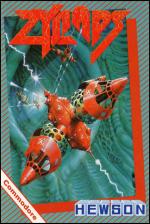 Far out, in the most remote reaches of space, a group of three multi-role Scorpion fighters set off on a mission to seek out and destroy a secret alilen stronghold. You are their leader.

The action is set over twelve different horizontally scrolling levels, starting inside the narrow and twisting confines of a space station. As soon as the Scorpion sets off, alien craft zoon in to attack. Contact with them or their missiles has fatal consequences, but an on-board double shot laser is used to defend the craft.

When a formulation of aliens is shot, a glowing fuel pod is dropped. These are automatically picked up when touched, the fuel enters directly into the ship's weapons system, and an icon is displayed at the bottom of the screen. At first this represents extra Speed, then advances to extra Lasers, Plasma Bombs, Homing Missiles and finally Seeker Missiles. When the desired additional appears, it is added to the Scorpion by keeping the Fire button depressed (the fighter glows to show readiness to accept an extra feature) when the next fuel pod is collected. The Scorpion holds a maximum of four extra speed and laser units, and two of any other feature.

When the Space Station's exit port is reached, a large alien mothership appears and blocks the way. Destroying this is the only way to progress to the next level.

After the confines of the Space Station comes a dense asteroid field, filled with attacking craft, and after that comes a series of stranger and stranger alien environments until, on level twelve, the alien base is reached - where a final deadly confrontation with the Mother alien is staged.

If you think that the horizontally scrolling format is beginning to be played out, play this and think again. Zynaps is addictive, plays well and feels good. The Scorpion hands beautifully, with just the right amount of inertia, and the alien attack patterns are unusual, with odd swirling and bouncing attacks.

The progressive icon system is totally unobtrusive and allows features to be added without interrupting the gameplay at all. In fact, the only thing that lets down the game design is the fact the level restarts whenever the craft is destroyed. It's pretty tough going, and later levels seem almost impossibly hard - but practice pays off. A brilliant atmosphere is generated by the unusual and pretty graphics, and the smart sound effects are suitably fitting.

If you're a shoot-'em-up fan, don't deny yourself a slice of this action.

Up until recently, it was my impression that shoot-'em-ups were always a product of the Status Quo school of computer programming - you know what I mean, all exactly the same except for a different guitar solo.

But this is very wrong, as Gary Liddon took great pains to point out to me. Most games of this type differ in one respect - feel - and this is where Zynaps is a real winner... it feels so good. The ship is incredibly controllable - with a beautifully weighted inertial control method - and the alien attack patterns provide exactly the right movement of challenge to give maximum enjoyment without ever becoming too easy.

Another important point is the method used to select extra weapons and abilities - it's remarkably simple, yet the fact that your hand never needs to leave the joystick adds greatly to the enjoyment and playability. Buy this - even if you've already got two million shoot-'em-ups in your collection.

Okay, so it's an old formula revamped in a new package - definitely scoring zero on the originality scale. But that doesn't matter, because even ignoring the superlative graphics and the super sound effects, Zynaps is a great game.

Head and shoulders above the competition, Zynaps is a sure-fire winner, bound to be hit with arcadesters both young and old. If you're looking for a little something to while away those balmy summer afternoons, then why not try Zynaps as a bit of a refresher...?

Hookability 84%
Initially difficult, but remaining addictive despite the frustration.