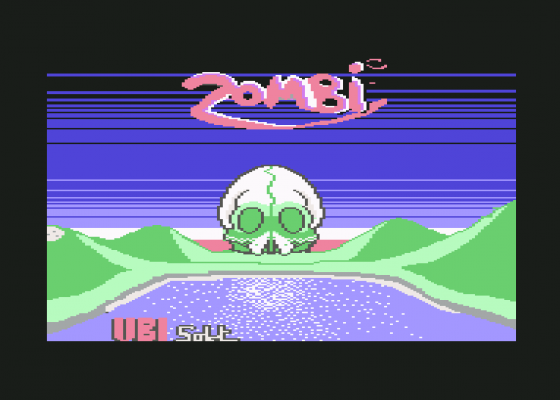 "Berkleys, United States, April 15th 1986 - and now the latest news... it has been confirmed that the plague affecting the area has spread worldwide... indeed they burst out from everywhere, from graveyards and mortuaries. They are dead bodies that came back to life... they feed on the flesh of their victims... lock yourselves in and wait for rescue teams..."

So Ubi Soft's Zombi comic begins. Comic? Yes, Ubi Soft turned the game manual into a comic, which continues after the radio announcement to show us some people holed up in a house. Realising that they cannot wait for the rescue teams due to their low supplies, they decide to make a break for it.

One of the members suggests the hospital as there is a helicopter sitting, rather conveniently, outside. So off they pop. Some of the team are picked off by the Zombi hordes on the way but, eventually, they find the helicopter and fly off. Horror of horrors but isn't the fuel tank nearly empty? 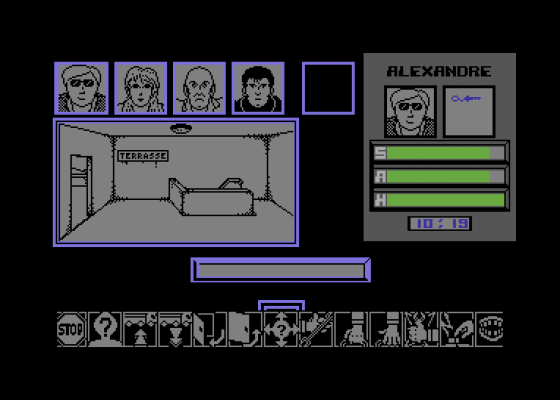 So they land on top of a supermarket tower block to see if they can find the fuel they'll need to get the hell out. Unfortunately after the comic intro, the two pages of instructions and tips are utterly confusing.

The screen is divided into a number of sections. The largest window provides the view to the game world. Other areas include bar graphs showing character stats, inventory, character portraits and command icons.

Zombi is played on a first person perspective view through the eyes of one of four characters that you control. The world is presented in black and white line graphics. To tell the truth though you soon forget the lack of colour since the graphics are well detailed. It also makes the game a lot faster.

During play, you take control of one character (they all start on the roof by the helicopter). Then you move them down each floor of the supermarket. During your travels you will come across items lying on the floor or within containers that open if you click on them with the arrow pointer. A mouse is the best controller here but the game works just as well with a joystick or keyboard. Items taken into your inventory can be used on other objects - a video tape in a video player, for example.

While you wander the area there is always the chance of a zombi appearing. When they do appear they do so very quickly. You cannot see them approaching, they appear close in. This results in a scrambling to get rid of the thing either by a weapon you may have found, or bare fists. Characters risk dying or, even worse, turning into a zombi themselves!

The game tries to promote an atmosphere of a chaotic and desolate world infested with fearful zombies. On the whole, Zombi just about succeeds in this as you are never sure when the next zombi will appear. Graphics are good, although sound is minimal. The one drawback of the game comes from a strange feeling you get the more you play. Zombi feels, well, old. The design and the gameplay are fairly good but... hmmm, I dunno. It is very similar to Catch 23, remember that? Similar game, similar gameplay. If it had appeared three or four years ago Zombi would have been a cracker. But now I can't help but feel it's well past it.

If it had appeared three or four years ago Zombi would have been a cracker. But now I can't help but feel it's well past it. 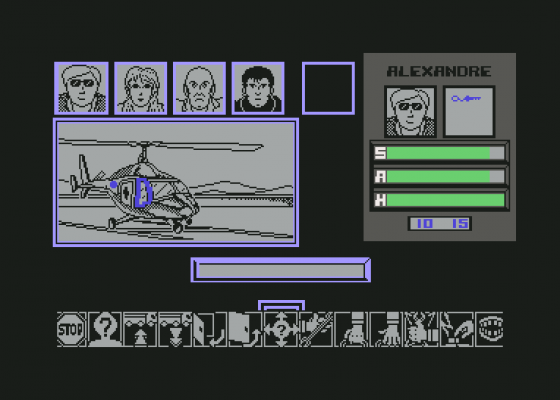 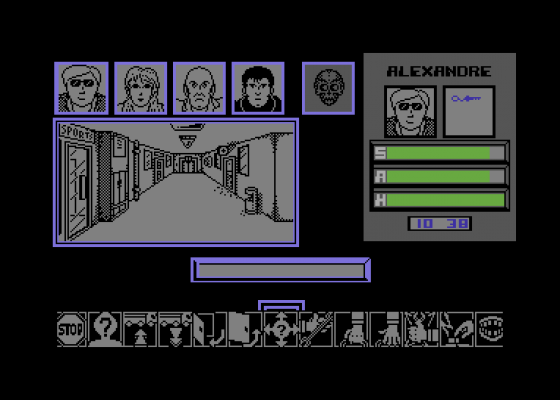