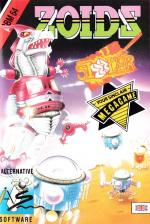 Remember the Tomy toys? Those galactic dinosaur thingies were lots of fun and easy to get into. Unlike the computer game, which is a bit too sophisticated for its own good. Time after time I tried to get somewhere and time after time I ended up dead within a matter of minutes.

You see, this ain't your run-of-the-mill arcade game but a sophisticated icon-driven tactical tussle. You control a wimpy Blue Spiderzoid, taking on the might of the Red Zoids. The main aim is to find the pieces of Zoidzilla, each located in one of several city domes in eight city networks.

The huge play area is shown by a map and explored by moving your Zoid along the road network. Using your icons, you can attack Zoids, cities, radio transmitters, etc, with your guns or missiles. Both weapons involve an arcade subgame: guns are aimed by continually manipulating the moving target into your sights - not as easy as it sounds; missiles are even harder to target, via plan an side-view guidance windows.

Other icons enable you to detect missile attacks, gain info on enemy installations, manipulate objects and jam enemy radio transmitters. The latter involves yet another subgame, and another which I couldn't quite master: somehow you have to adjust various parameters to create an identical wave pattern.

I'm sure more patient souls will enjoy the strategic sophistication of Zoids, with radio towers and power stations to knock out before attacking cities. Maybe my mind just isn't strong enough to merge with one of these mechanical monsters although, having said that, I can appreciate the quality presentation and depth of gameplay without really getting very far. Be warned, this is one hard game.

Patient souls will enjoy the strategic sophistication of Zoids, with radio towers and power stations to knock out before attacking cities. But be warned, this is one hard game.