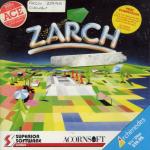 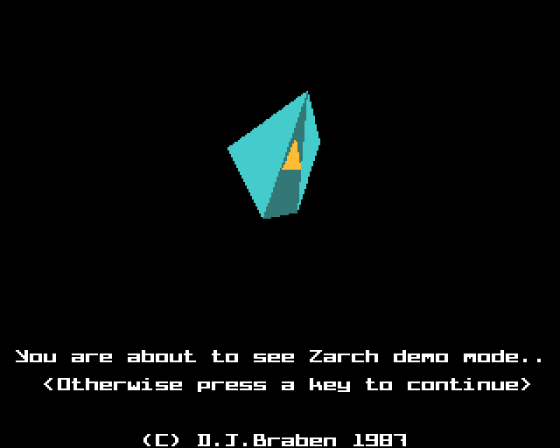 You may well have been wondering what the co-authors of Elite have been doing in between counting up all their lovely lolly. Well, one of the duo, David Braben, has spent the last few months developing the first ever game for Acorn's new super-computer, the Archimedes.

Entitled Zarch, it is a mixture of arcade and strategy rolled into an absolute hum-dinger of a game that will probably sell as many Archimedes systems as Star Raiders did Atari 400s back in 1981.

You are the pilot of a Zarch hoverplane, with orders to save your planet from infestation by a deadly red virus being sprayed over the countryside by waves of marauding aliens. 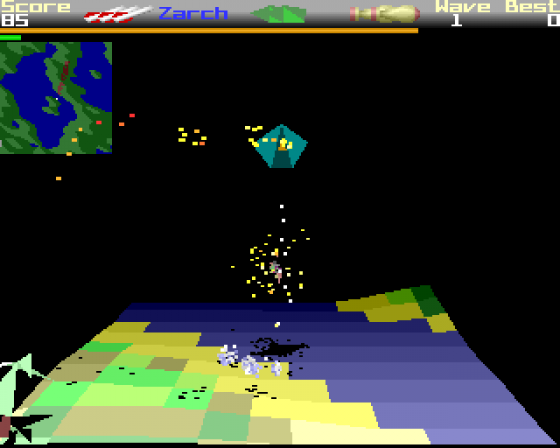 The game contains a three dimensional, sculptured landscape, complete with hills, lakes, trees and other landmarks. The action elevation actually changes as your plane gains - or loses altitude.

Flight control is via the Archie's three buttoned mouse. Actually manoeuvring the plane is not at all easy, and is based on the principle of a 'central mouse position'. The direction and distance you move the mouse away from this central position determines the 'compass direction' the plane will face, and its declination (angle of dip) to the ground.

By combining these controls with the thrust button (left hand mouse button), the plane can be flown at any speed, at any angle, in any direction... quite a handful! 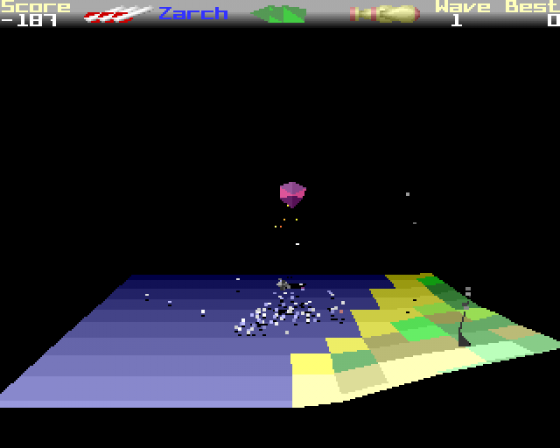 As you press the thrust button, a beautiful plume of matter spurts out of the back of your plane, and is left hanging in space like a three dimensional wake. Alien ships each have their own plumes, but such is the power of the Archimedes, that the smoothness of the animation of each individual matter particle doesn't even flicker when the processor is called upon to handle a number of planes concurrently.

The arcade elements of the game involve you in mid-air skirmishes and dog-fights with various brands of alien, some innocuous, others highly dangerous, although you won't even defeat the softest of opponents until you've mastered the flight controls.

Alien planes come in six varieties: Seeders, Crones, Mutants (mutated Drones), Bombers, Pests and Fighters. Each have their own role in the general scheme of things. Some, like Pests and Fighters, concentrate on blowing you into oblivion, while others, such as Seeders, fly around spraying the landscape with the virus, always on the lookout for a suitable place to land so they can contaminate yet more of the countryside. 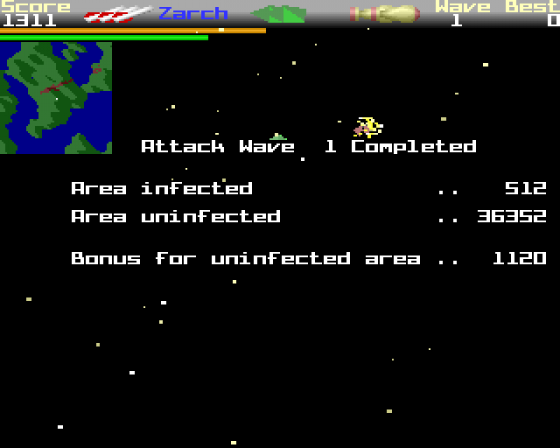 To combat the aliens, your plane is equipped with short and long range scanners, a laser cannon, and a limited supply of smart bomb and homing missiles.

If you succeed in knocking off the first set of Aliens, another wave appears in their place, and so on. Luckily, in between each wave the land is cleansed. A bonus is awarded for each sector of ground left uncontaminated at the end of a wave, and herein lies the strategic element of the game.

In order to get a good score, you must wipe out the enemy as clinically as possible. This cannot be achieved by merely flying around aimlessly, blasting anything unlucky enough to cross your path; although, as with all the best arcade/strategy games, Zarch can be played quite satisfactorily on this level.

No, the way to impress all your friends (if owning an Archimedes hasn't done that already!), is to attack selectively, based on what type of alien does what. For example, fighters don't spread the virus, so leave them for the moment and concentrate on Seeders and Bombers; they're the ones spraying the countryside red! Each type of alien appears as a different coloured blip on the scanner, so you should get used to recognising what's going on around you.

Zarch prompts one to reel off a string of superlatives. In the graphics and animation departments, it is head and shoulders above all its rivals.

If you can master the pig-like controls, the game is enormous fun, but alas, never was so much appreciated by so few. As luck would have it, Amiga owners will be able to sample the delights of Zarch early next year, this time courtesy of Rainbird Software. It will be interesting to see how this version compares with the original.

Zarch prompts one to reel off a string of superlatives. In the graphics and animation departments, it is head and shoulders above all its rivals. 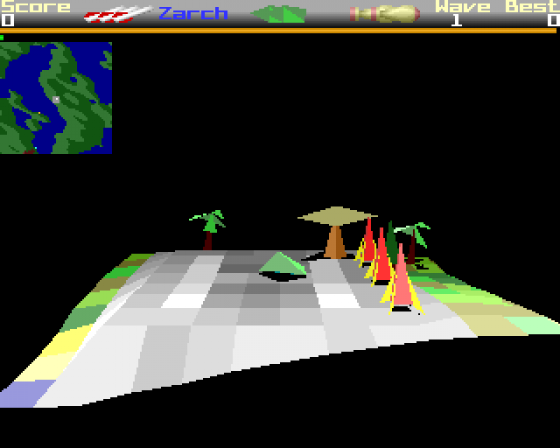 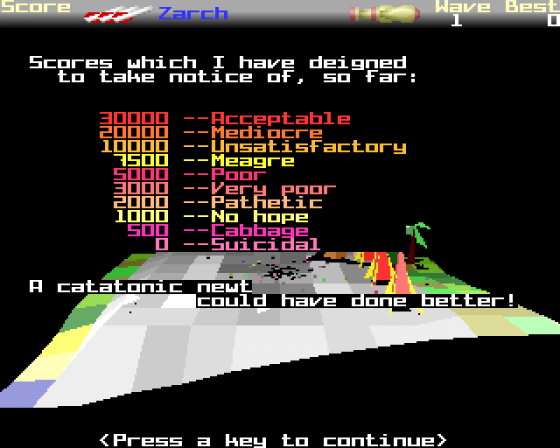