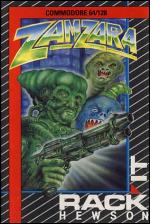 It was yer average day on yer average alien fighter base. The sun burned green in the purple sky and the astra-terrestrial army was going through its daily nose-picking ritual when a blazing fighter plummetted from the sky. The pilot was still alive - but she looked a mess. A real mess. All she could do was mutter one word - Zamzara.

OK slime-face, here comes the mega-question. Are you alien enough to brave the enemy-infested planet Zamzara yourself? 256 scrolling screens inhabited by belching missiles pods and the sort of monsters you'd rather get eaten by than have to look at? With only a machine gun and a limited supply of mega-weapons to your name?

Whaddya mean you can't, you've got to feed your pet okapi? Get back to your ship, get wise, get cool, *get going*.

Cor blimey, take a look at those graphics! Not 'arf bad for a cheapo budget game, huh?

What about the rest of it then? Does the gameplay match up to the mega-cool alien image? Yep, it most certainly does. The scrolling's dead smooth, there are loadsa different weapons, enough aliens to keep your bazooka smoking till next Sunday and the action's ever so tough.

Get this... or spend the three quid on having your head examined.

There I was, thinking what a shame it was that you don't seem to see that many good budget games any more (and other equally depressing things) when Zamzara comes along and ruins my theory.

The animation on some of the aliens is dead good and the main sprite looks exactly like the lizard hero in the film Enemy Mine. Some of the special weapons are really unusual and the gameplay throughout is brilliantly designed.

If you've got three quid spare, spend it on this - it's one of the best budget games around at the mo.

Presentation 65%
Game over tune, and high score table. Well, what more do you want?

Lastability 92%
It gets pretty tough so you'll need to keep in practice.

Another dead good game from Rack-It.