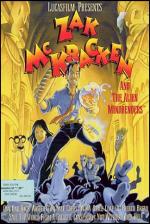 Go on then, do it - name a fate worse than death. Being stampeded by a herd of sheep in green wellies? Being forced into close hair-to-hair contact with Gordon Houghton's blubber belly (aaargh! I can't stand it!!)? Swallowing ten gallons of cod liver oil in one go without breathing, being forced to listen to a bloke screeching his ten foot nails down a blackboard for five days? Pretty bad, eh?

Ha! Still not as bad as the fate Zak McKracken faces. Nope, not half as bad as that, not a tiny weeny bit as bad as that. I mean, if you were just an average, ordinary newspaper journalist trying to make a crust reporting about two-headed squirrels and the like, you'd be pretty horrified if you found out that nasty, bald-headed aliens were trying to invade the world. Shock, horror an' all that and everyfin'. And how are they trying to invade it? They're slowly sapping everybody's intelligence - so that they end up as stupid as Maff... er, I mean, as very stupid people in the end.

Now Zak's clever and he wants to stay that way, so he and (eventually) his three companions, Annie, Leslie and Melissa try to hit on a way to save the world. Cue very loud fanfare, MGM music, hymns and songs.

Zak's saga is played out pretty much in the style of Lucasfilm's other joystick-operated adventure game - Maniac Mansion. The action of Zak and his mates is controlled using cursor, joystick and a menu system of possible commands and displayed a bit like a film in the top half of the screen.

Basically, you move the cursor over verbs like "Walk to" and "Use" and then move it over the appropriate object either on the screen or in your inventory. Easy, eh?

It's up to you and your own little set of brain-cells (whaddya mean you haven't got any?) to direct Zak from his humble first floor flat to Miami, Stonehenge, Mexico, Seattle and finally - wait for it, wait for it - Mars! Wooh!

Meantime, Zak can go into all sorts of different shops, buy a Groucho Marx disguise, watch TV, play with his pet sushi (er, yeah!), get on buses, turn on taps, talk to religious devotees, try to map a Mayan maze in Mexico, look for a space suit (vot, no helmet?), collect ancient artifacts, mess about with holographic projectors, explore secret chambers, try to survive an encounter with a shark and play the kazoo to his heart's content (Phew! that was a long sentence and that's only about half the things you can do!). It might not always do any good but anything's worth a try when the future of the world's at stake. Well it is, innit?

Every now and again the action's interrupted by cut-scenes. Whassemthen? Little cinematic scenarios designed to let you know what's going on, that's what. You don't control these - you just sit quietly with your legs crossed and watch.

When you finally meet up with one of the other three characters (and remember, you're all gonna be heroes!) you can even select "Switch" to become a girly. Far out!

And that's about it, really. Well, OK, there's quite a lot more but to find about all that, you'll just have to play it, won't you?

Well, I thought Manic Mansion was brill and I think that this is even briller. It might take a bit of time to get into, but once you've sussed the input method and found a couple of really weirdo objects, you're most definitely hooked. There isn't all that much sound, but the controls are really smooth on both versions and the gameplay is even better!

In fact, right from the bizarre beginning to the eccentric ending, Zak is compelling, enthralling and utterly hilarious - simply the best action/adventure combo I've seen. If you've got a disk drive (any size) keep bothering your friendly software dealer until he'll let you buy it. Pity it's only on disk, though.

OK, anyone who hasn't got a sense of humour leave the room immediately, this is not the game for you. Everybody else, get this or you'll be missing one of the funniest (chortle, chortle, fnar, fnar, etc) games I've seen in ages. If you want to see a couple of real berks, take a look at some of the cut-scenes - they're dead funny. I reckon it's just as good on both formats, though the sound on the Amiga (there is a bit more than on the C64 but not that much) is a bit of a disappointment.

Disk access is actually quicker on the C64 version for some reason...

Look, just forget about all the differences - both versions are brilliant, and whichever machine you own, you'd be Zak McKrackers to miss it! [That joke is rubbish, Maff - Ed]

I haven't seen anything as silly as this since, erm, the last really silly thing I saw, which was Ken D. Fish in a penguin suit dancing the samba [Oi! Less a' that - Ken]. Yes, well he'd had a few too many swigs of pond weed punch that night.

Anyway, back to Zak - not only is he pretty silly and a lot of laughs, his game is also incredibly deep and dead involved. Once you get into this, I bet you'll be sitting up night after night playing through it over and over again.

It doesn't matter which format you play it on (the sound isn't all that hot on either, but I don't care!), you'll love this right from the word go. The story's funny, the plot's really clever and there's loads of thinking involved.

Graphics 74%
The C64 version sports big and colourful sprites but the scrolling jerks a bit. More detail on the Amiga version - still not as much as you might expect.

Sound 36%
Apart from the odd atmospheric sound effect, not much really.

Overall 93%
A real riot of an action/adventure game. Miss it and be reeely square.