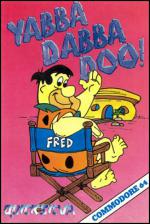 Based around the popular and timeless (literally!) children's cartoon, Yabba Dabba Doo puts you in the place of Fred Flintstone attempting to build himself a house and lure Wilma into matrimony.

This you do by marching around the many screens finding rocks to build your house with and clearing up other (unsuitable for building) rocks.

Other parts of the game involve driving around in your car, earning money at the quarry and hiring a dino to put the roof on.

The animation and size of the characters is very good though the transition from screen to screen could be (an awful lot) better. Going from left to right is ok, but to travel further from and nearer to the mountains requires you to go off a side of a screen, but with your joystick pointing up or down as required - very confusing...

Various nasties are out to get you, including a homing tortoise, a prehistoric kangaroo, and your faithful dog-thing.

I thought that these creatures were far too beligerent, and along with the awkward movements, contributed to spoil the whole game. It looked like the designer/programmer couldn't be bothered to think up some better ways of hindering the player, so just made a few sprites wander around the screen and give you no defence against them. A club to bash them over the head would be nice!

The game is not difficult - just hard. And this spoils it, especially for the younger player who would appreciate it.

To sum up, great graphics, great concept, but disappointing due to a few small design errors.

Great graphics, great concept, but disappointing due to a few small design errors.