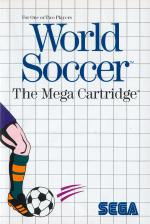 Sad that the World Cup is now over? Well, take heart, because here's a Sega game that lets you recreate your very own World Championships in the privacy of your own front room. Options at the start of the game let you choose a one or two-playor game If you choose the one-player game you then have to pick your team, from a choice of eight, and a computer team to play against. Then it's onto the game itself.

The action is played over a horizontally scrolling pitch. You control the player nearest the ball, and are able to dribble, kick, pass and do overhead kicks and banana shots When the opponent is on the ball you're able to slide tackle and. if you time your challenge correctly, regain possession.

The object, just like real football, is to outscore your opponent, it you win your team is presented with a cup - there are no prizes for losers!

A very useful tactic to learn is the overhead kick, especially when the keeper has just kicked the ball out of the area. Keep your finger on the kick button and blast it back at the keeper - if you use the banana swerve arrow you should be able to kick it right into the goal!

There are eight teams to choose from - Argentina, West Germany. France, Brazil. England. Italy, USA and Japan. Each has its own skill levels, so it you play the worst team, say Japan or USA. with the best. Brazil, you'll stand a better chance of winning This means that you can make the game more challenging by choosing a poor team like Japan and playing one of the best teams - which requires much better skills to win!

Keep your opponents foxed by constantly passing the ball. This helps you break through their defence and get a good clear run on goal. As soon as you're In a shooting opportunity, let rip with a super banana shot and beat the goalie!

If, at the end of full time, the game is a draw you get to a penalty shoot-out situation where both you and your opponent have five penalty kicks apiece. Outscore him and you win - fail and you're out! Penalties are quite tricky to master, but fortunately there's an option on the title screen that lets you practice Make sure you do. and you should become unbeatable!!

Taking penalties is tougher than it seems - especially against the incredibly good computer goalie. The best thing to do is take your shots to the top left or right of the goal - that way you'll stand a better chance of beating the keeper.

I'm a very keen football fan and welcomed this Sega game with open arms. It's very similar in looks and play to Sega's World Cup Soccer arcade machine, with chunky, almost cartoon-like players running around the smooth-scrolling pitch. Control is excellent, with a variety of moves available to the player - my favourites are the overhead kick and the spectacular whopper banana shot. The game is pretty challenging, especially when you're playing against Brazil, but it's best appreciated when there are two human players battling together. If you're a Sega-owning football fan. make sure you don't miss this.

Presentation 85%
One or two-player game and penalty shoot-out contest.

Graphics 82%
Decent sprites and the smooth-scrolling pitch is nicely drawn.

Playability 89%
Mastering the controls takes a bit of practice, but it's all fun from the start.

Lastability 88%
The computer teams are reasonably challenging, but it's the two-player option that makes this fun to go back to time and time again.

Overall 87%
A thoroughly enjoyable football game which offers all the thrills and spills of the real thing.

A thoroughly enjoyable football game which offers all the thrills and spills of the real thing.