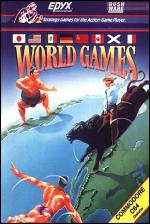 Following on from the immensely successful Summer and Winter Games series is World Games, a sports simulation that takes you around the world, embracing the traditions and customs of eight different countries. The program allows up to eight people, representing any of eighteen different countries, to compete against one another and go for gold.

World Games has a comprehensive options screen which allows players to compete in either one, some or all of the events. You can also practice an event to your heart's content. If you compete in an event, or events, though, you are only given three attempts to prove your worth. Each event is loaded individually.

The disk version has two extra features not present in the cassette version. Firstly, any outstanding performances can be saved to disk for posterity (or ego tripping - whichever you enjoy most). Secondly, there is an option to display a location description before you compete in an event.

Here is a breakdown of each of the eight events...

In this battle of the steroids, you step into the shoes of a well-endowed weightlifter. There are two type of lifts: 'clean and jerk' and 'snatch', both controlled with forward and backward movements of the joystick. In the 'snatch' your strongman picks up the weight when the joystick is pulled back - lifting is done by pushing, snatching by pulling, and the final lift is a push. Sounds easy, but timing is absolutely critical. Push or pull too fast or task too long at any time and your lifter will drop the weight. The 'clean and jerk' uses a similar control method, only there are more forward and backward movements and the timing is even more critical.

This event is based on the traditional Nordic obstacle races, and has you skiing down a demanding course spread over a cold and icy piste. To complete the course in the fastest possible time, you have to skillfully mix timing, speed and control. Missing too many gates, hitting the side fencing or colliding with a gate results in instant disqualification. Your man automatically speeds down the vertically scrolling course and can be moved left or right by pushing the joystick in the relevant direction. Pressing the fire button while turning speeds up the movement, useful for negotiating the tighter parts of the course.

Balance and agility are the order of the day as two players attempt to dislodge each other from a large, floating log by spinning it back and forth. By rhythmically moving the joystick left and right, a player can speed up or slow down the rotation of the log. Pressing the fire button reverses the direction of roll, thus momentarily unbalancing your opponent. High scores can only be obtained by quickly removing your opponent from the log and maintaining your balance as you do so.

Precise timing and nerves of steel are essential in this breath-taking event. A press of the fire button launches your diver into the air, where he proceeds to fall until he hits the water below. The screen scrolls vertically as the diver falls, and you must ensure that his back is arched to counteract the oncoming wind. As soon as the water looms into view, straighten out to enter smoothly, then quickly turn to avoid hitting the sea bed. A dive can be made from one of six heights, but to score maximum points a dive must be made from the very top of the cliff, 118 feet above the small, shallow expanse of water which breaks your fall - or your neck should you err!

Up to the bonny hills of Scotland to compete in the famous highland games. Timing and a hefty load-bearing capacity are the keys to this demanding test of strength as you strive to chuck a telephone pole sized caber as far as possible. Your kilted athlete runs (staggers?) when the joystick is moved left and right, and throws the caber when the fire button is pressed. The longer the fire button is depressed, the further forward the caber pivots in his hands. Releasing the button causes him to actually throw the caber. Should you throw too early or too late, then the caber will land quite dramatically on either your head or toes.

Since the advent of this sport over 300 years ago, there has been many a bruised posterior to tell the tale of a jumper who failed the clear the last barrel. At the beginning of this event, your skater gives the thumbs up to tell you when he's ready. You can then set him skating across the ice by moving the joystick left and right. A good rhythm is most important, and so is a well-timed take-off. Pressing the fire button sends the brave skater sailing into the air, and pulling back on the joystick braces him for landing. If you fail to complete any one of these manoeuvres correctly, then your skater could end up badly battered and bruised.

A true battle of the bulge - wrestling the Oriental way. In this one or two player head-to-head event, you have to simply (!) get the better of your opponent by either toppling them to the ground or pushing them out of the ring. There are twelve moves open to each player, such as pushing, pulling, grabbing, slapping and tripping, along with a spectacular over-the-head throw, better known as the Utchari. All moves are accessible via the joystick. Points can only be gained by fast, successful moves and a quick result, i.e.: the shorter the match, the higher your score.

Epyx have truly excelled themselves and have produced their most impressive and playable sports simulation yet. The attention to detail is meticulous and there are loads of neat touches throughout the game. Such as the weightlifter breathing and rubbing his hands around the bar between the weights; the skater who plunges through the ice and turns blue with the cold when you inadvertently forget to prepare him for landing; the bull leering at you after you've been thrown; the fatty sumo wrestler flat on his back, dazed and panting... I could go on for ages describing the numerous humorous aspects of this game.

Not only have Epyx produced an unbeatable game - they've come up with some of the best graphics and sound I've ever seen and heard. The backdrops are great, and the sprites are beautifully drawn and animated. The eight new pieces of music are brilliant, and the spot FX are outstanding. World Games is a stunning package, and I have absolutely no reservations in recommending it to anyone as this is the most enjoyable game I've ever had the pleasure of playing. I don't think the tape version will be too much of a pain, since each event is extremely playable in its own right - more so than any other previous Epyx offering. The sumo wrestling and log rolling events are my favourites, especially when playing head-to-head with another player. With World Games to play for many months to come, I can certainly wait for Winter Games II!

How wrong I was when I thought that Epyx had exhausted their supply of sports. World Games contains all of the activities you would never dream of seeing on a home computer. As with all of the Games series, I was immediately taken by the superb graphics and the amount of detail used in the animation.

World Games consists of eight games that are all very playable in their own right. Each even features some stunning spot FX and superb compositions. The bagpipes on the caber toss are as good as, if not better than the real thing. All the events have a real sporty feel to them which makes them immediately addictive. Being the office sportsman I can definitely say that without a shadow of a doubt, World Games is the new sports simulation of the decade and a must for all armchair enthusiasts.

Forget everything else, this is the definition of 'state of the art'. The graphics are nothing short of miraculous, and the animation is totally out of this world. There are so many brilliant touches to this program, seeing is the only way of believing. Hearing is the only way of believing too! The bagpipe tune announcing the Caber Toss is unbelievable! Forget the Fairlight, SID can do it too!

The game is a pesky multi-load job, but then it's worth waiting every second for each event to load. Go and get it - it does for the Commodore what Trident does for demolition!

Sound 99%
Several excellent tunes and spot FX capture the atmosphere of each location.

Lastability 97%
And the first impressions last.

Value For Money 97%
Eight compulsive events for a tenner.

Overall 98%
Yet another quality Epyx production. The state of the art sports simulation for the C64.

The state of the art... Yet another quality Epyx production with eight compulsive events for a tenner.