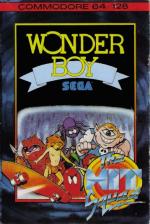 August 1987 was when Sega coin-op Wonder Boy made its C64 debut. Later to be made "Super" in the sequel reviewed last issue, our hero is here occupied with trying to rescue his fiancee from the evil king and his foul minions.

There are four horizontally scrolling backgrounds to be completed, each with a time limit, plenty of baddies, lots of platforms, and a rich crop of bonus point fruit. To help you, there are golden eggs which can be cracked open to give Wonder Boy axes to throw, a skateboard to speed him up, or a fairy which makes him invulnerable for a short time.

As you'd expect of such a stereotypical Japanese "Mario Bros"-type game, the sprites are all extremely cute and colourful. They're also quite big, although this doesn't diminish the need for pixel-perfect jumping. There's a nice variety of backgrounds including a jungle, island paradise, and ice palace. There's also the essential cheery tune, in this case a bit irritating, although it can be swapped for okay sound effects.

Two players can take turns to play, and gameplay is fun enough to make it all worthwhile. On its release the game earned 52% with coin-op addict Julian Rignall complaining about it being a "far too easy" conversion of a "not exactly brilliant" arcade original. But for mere mortals, the game should provide a reasonable challenge. The four relatively short levels certainly seem better value at £3 than £10. Well worth a look if you like this sort of cutesy game.

Provides a reasonable challenge and well worth a look if you like this sort of cutesy game.