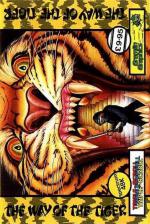 The two tapes that come with this package contain four programs; three combat "modules" and one master program, within which the others run. After the uninteresting title page has removed itself, you're presented with a list of options regarding how you want to progress through the programs. You can either try to fight your way through all the stages, or practise each one in turn.

For some reason, neither the unarmed combat or the pole fighting wanted to load the first time I tried. On the second attempt, though, they worked without any problems.

In this game, you take the role of The Avenger, battling against Evil "...in defence of your faith, and protection of the weak..."

As soon as stage 1 - Unarmed Combat - begins, you will notice the detailed graphics. Although not as fast, they are much more realistic than Fist. The background has animation too, with various birds and very short orientals scurrying about.

After a couple of seconds, you'll notice that the background seems to have a life of its own! The screen not only scrolls left and right, as you batter your opponents, but up and down as you duck and hurl yourself out of harm's way. The scrolling is smooth and sensible and definitely adds to the enjoyment of the game.

Control is via the joystick or keyboard, and includes many similar movements to Fist (in the first stage). The response is a little slow at times, and it is possible to get caught in a constant barrage of your opponent's blows.

The next stage is Pole Fighting, in which you find yourself standing on a log with - surprise, surprise - a pole. You are immediately confronted by a tall character, vaguely resembling a skeleton in a kilt. By using the same joystick movements, the appropriate moves can be achieved. Of course, if you're swinging wildly around with a 6ft pole, you have a very good chance of falling into the river beneath the log!

Samurai Sword Fighting is the final event, and the most difficult. Here you are presented with a stereotype Samurai warrior, complete with armour and spikey helmet. Something I found a little worrying was the fact that I could deliver a batch of "head splitters" to my opponent with apparently no effect. He, however, could despatch me with one blow. This may have something to do with the fact that I wasn't wearing a spikey helmet.

The key to the game's appeal is variety. Each stage provides an original challenge, and you can really feel yourself becoming more competent with the pole and the sword. At £9.95, the game is hardly cheap, but bearing in mind the quality of some other products costing the same it's good value.

The key to the game's appeal is variety. Each stage provides an original challenge, and you can really feel yourself becoming more competent with the pole and the sword.