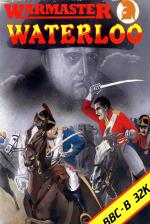 The latest wargame from the people who brought us the Confrontation series and other beligerent classics like Paras and Johnny Reb. This one enables you to replay (or re-fight) the Battle of Waterloo, and begins with Wellington's and Napoleon's armies drawn up exactly as they were at 11am on June 18 1815. From then on, it's entirely up to you to decide the course of history.

If you're lazy or a pacifist, you can watch your micro play the whole battle by itself - which should give you some ideas about tactics. Or you can fight against the computer (but only as Napoleon, not as Wellington - I wonder why?). Or two players can battle it out between them. You bring your artillery, cavalry and infantry into action by darting a cursor across the battlefield and, if you're anything like this amateur Napoleon, you then watch them being methodically wiped out by the superior tactics of the Iron Duke. It's a race against time anyway; if you can't rout Wellington pretty quickly, old Blucher soon turns up with his Prussian army and completely overwhelms you - just like in 1815.

It's a most enjoyable experience if you revel in this sort of haphazard chess game. There's an almost infinite choice of moves and tactics to keep the game exciting, so no two battles should be the same.

The graphics are somewhat primitive compared to what the BBC Micro and Electron are capable of, but they are secondary to the logic programming which keeps the pieces on the move, especially when the computer's army is playing yours.

A few little niggles make it a less than perfect piece of software. First, it's difficult to position the cursor accurately using an analogue joystick (a switched joystick makes it much easier).

Second, if you decide to use the keyboard option rather than a joystick, there's no choice of keys and the ones chosen for you are a bit eccentric. A more orthodox set for up, down, left and right would help the inveterate games player enormously.

Third, at the end of a battle, there's no way to start the game again without reloading the whole program.

And finally, cassette users - who need patience at the best of times - have to sit through an interminable loading process. If you choose to skip the lengthy introduction screens (it's all in the book anyway!), you still have to wait for them to run through the tape. Then, whether you've chosen keyboard, joystick or computer only, you have to wait while the two unnecessary programs run through before you get to the vital data.

Take a tip from Napoleon and *CATalogue your cassette with the tape counter, so you know where to fast-forward to.

A few little niggles make it a less than perfect piece of software.