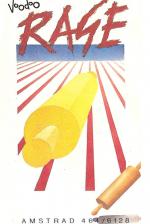 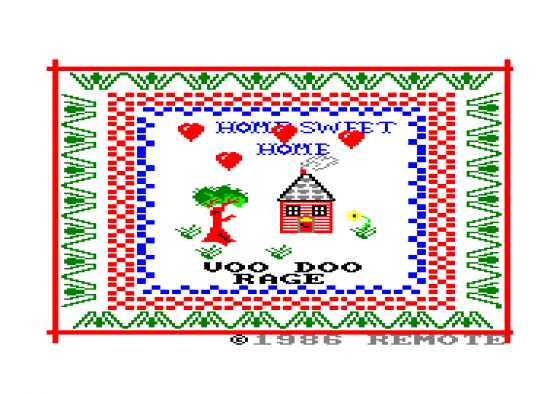 Despite the imaginative title this is in fact just another platform game, the most noticeable feature of which is the appalling scenario that sounds more like something out of a Bernard Manning 'comedy' routine. Basically, it's about a wife trying to stop hubby playing computer games; a sexist scenario and a simple, old game combined to make one bad package.

There are twenty screens to get through in sequence, and on each one you have to perform the familiar task of picking up all the objects on screen while avoiding the mutant creatures trying to stop you. The platforms on which all this takes place look different on each screen but behave in exactly the same way. Your character can walk on them, or freely jump through them to get up the screen.

The husband appears on a platform which also contains a video game console of some sort. He wanders randomly to and fro on the platform, and while he's doing that you can't touch him. However if he starts playing at the console and you've picked up a rolling pin you can go and beat him up for bonus points. He doesn't go to the console very often - I wonder which game he's supposed to be playing?

The screens are quite simple in design: you have to avoid all the creatures that move, and collect anything that doesn't. Contact with a monster, or a long fall, claims one of your three lives, but most problems can be solved by throwing a 'voodoo rage'. The instructions tell us that this is 'like having 30 mothers who all lose their tempers at the same time', and if they've seen this game I'm not in the least bit surprised.

A rage will last for ten seconds and during that time the creatures are frozen and can be touched without harm. You only have ten of these rages to use but they make the job considerably easier while in operation. Even with a rage on you are still susceptible to long falls and death from hitting the bottom of the screen.

The creatures and objects are quite nicely drawn, but they are very small and the rest of the screens are uninteresting. The sound effects are also simple, but the game's big problems are that it is totally unoriginal, the gameplay is simple, and the scenario awful. Cheap game, cheap jokes and not a lot of lasting interest.

Platform games are tired enough if they're done well, but this one puts 'em to sleep for good. The scenario would insult the intelligence of a slug, and the gameplay isn't much better - rotten collision detection, an unoriginal task and boring screen layouts make for nothing but tedium. A great title tacked onto a miserable game.

The second screen is pretty hard to see, but that can only be an improvement.

P. Getting through 20 screens will be tough.
P. The 'rage' and husband beating add some originality.

Kills platformers for good. Rotten collision detection, an unoriginal task and boring screen layouts... It makes for nothing but tedium. 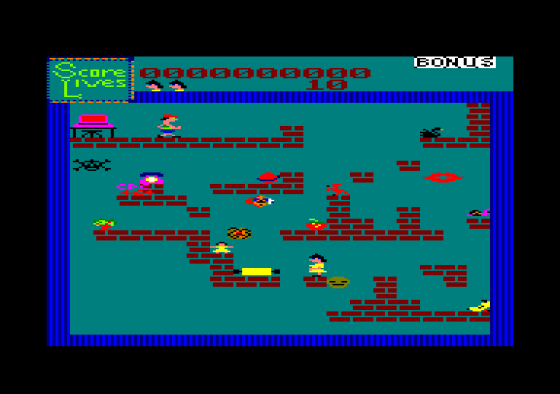