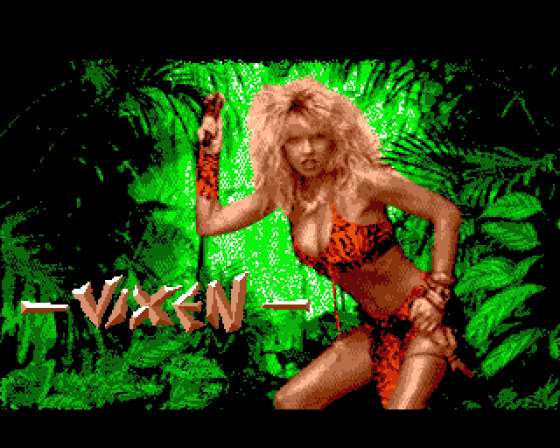 On those days when the bus is late, there's a bumper edition of Gardener's Question Time and you can't find your deodorant, cheer up - life on other planets is even worse. Granath, for instance - a planetful of whopping great prehistoric monsters constantly on the lookout for a tasty bit of lunch.

The only human being still left alive is Vixen, who was raised by foxes and is mistress of a pretty nasty whip. Her struggle to survive this hostile environment is depicted in the form of a series of timed horizontally-scrolling levels.

Sensibly equipped with bikini and leather lash, she jogs along, leaping chasems, climbing steps and whipping crowds of prehistoric blobs into the ground. Hitting headstones reveals bonus objects and fox time icons. Collect enough of the latter and you're granted access to an underground bonus level. 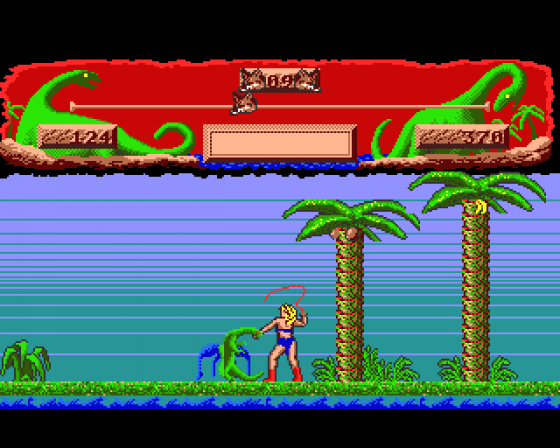 At this point the foxy lady stops being a lady and turns into a fox. Underground goodies include mega gems and mega whips. Collect them all and you're back on the surface resuming the whiplashing battle to survive. Epic, huh?

The Vixen publicity campaign has really fallen flat, splat on its face. If the box weren't covered with pictures of Corinne Russell, it probably wouldn't be so noticeable that the Vixen sprite doesn't look like her at all.

With no face, a gait like a limp chicken and a limbo-dancing death throe, she doesn't look as if she could survive a tiny tots' disco - let alone Granath. The appalling graphics wouldn't matter so much if the gameplay made up for it - but it doesn't. 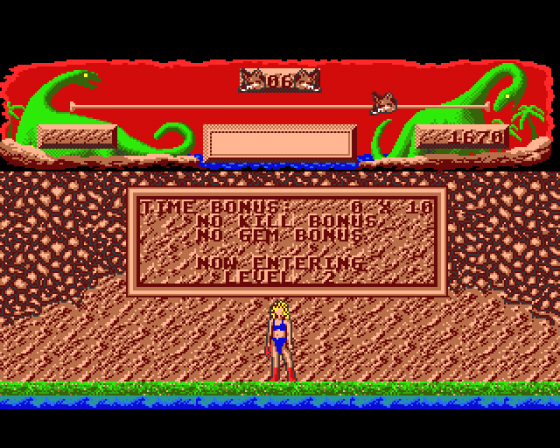 Hour upon hour of crouching and whipping is about as fun as eating ten raw elephants with false teeth. Bleuch!

The controls are awkward and so is the scrolling. If you feel like splashing out, splash out on something else.

Vixen, in my opinion, got off to a bad start with the public, relying on the software buyers' perviness, and a stream of controversial publicity to promote sales.

All the hype seemed to me to be built up around a load of pretensions, and we find, as expected, that the game doesn't live up to these pretensions. The jungle-music soundtrack soon becomes tedious, and the graphics look as dated as an episode of Lost In Space, except Vixen is in colour, worse luck.

I say 'worse luck' because the colours are hideous. I mean, green and orange monsters, yeeeuurgh! However much Martech charged for this it would be too much. Actually, you'd have to pay me to have this!

Vixen is dreadful. Really dreadful. Got the message?

I didn't think much of the C64 version when it came in, and, deary-oh-me, the Amiga version is no better. Gameplay is still the same pointless move-right-crouch-whip stuff that had me slumped over the C64 keyboard, which is no more than you would expect, I suppose.

"But the graphics and sound - surely they're improved, Paul?"

Well, not really. Miss Foxy Amazon lopes along like a reluctant jogger to the beat of some insipid jungle disco sounds, and Granath's itinerant fauna still consists of poorly-animated mutant... things... which don't resemble anything that could evolve by Darwin's processes of Natural Selection.

Sound effects don't exactly recreate the mystery and excitement of the jungle, and even Vixen's deadly whip makes a noise like someone clicking their fingers. Suffice it to say that the game lives up beautifully to the very tacky packaging, and is deserving of no-one's money.

Presentation 45%
Unless you count the Corinne Russell poster - nothing special.

Hookability 26%
Curiosity keeps you playing until you get to the bonus section...

Overall 25%
A totally unoriginal collect-'em-up with nothing at all to get in a lather about.

A totally unoriginal collect-'em-up with nothing at all to get in a lather about. 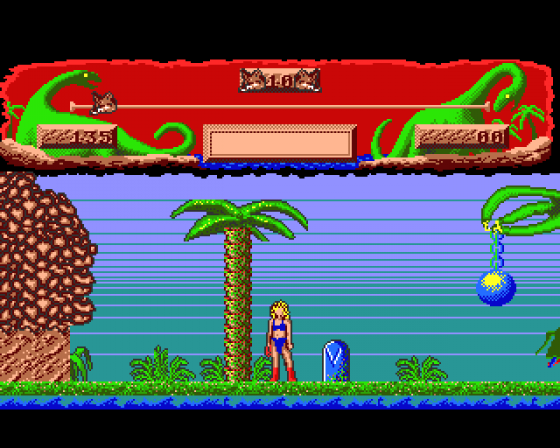