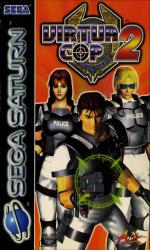 Call 911! The foul EVL Corporation is running riot in Virtua City once again and the boys in blue have requested backup. Have you got what it takes to clean up the scum-filled streets or are you gonna be going home in a body bag?

As a matter of history, light gun games have a bit of reputation for being repetitive, predictable affairs with shallow gameplay and very little replay value. The likes of Operation Wolf and T2: The Arcade Game stand out as two cool games that offered a true two-player challenge but on the whole these coin-op cabinets were usually relegated to the back of the arcade and treated with scorn by hardened gamers. However, two years ago, Sega redefined this much-neglected genre and produced a polygon-powered, police-themed, pulse-pounding, pistol-packing title that showed there was still life in the old dog yet.

Thus the first Virtua Cop game was something of a major hit both in the arcades and on the Saturn. Taking their winning first person shoot-'em-up formula to the next level, coin-op gods AM2 then produced a superlative sequel, the imaginatively-titled Virtua Cop 2. Now, after months of development, tantalising preview screenshots and the prospect of dusting down our Virtua Guns for the first time in ages, Mean Machines Sega finally targets the awesome Virtua Cop 2. Do ya feel lucky punk?

Virtua Cop 2's gameplay remains as user-friendly as ever with both joypad users and Virtua Gun owners being catered for. Of course, the ideal way to play the game is with the gun (or two guns if you're a pistol-packin' mutha!) but even the joypad response is excellent with an on-screen cursor providing pinpoint accuracy.

Holding down the B button speeds the cursor around even faster and also reloads your weapon when tapped twice. However, the Virtua Gun is still an essential piece of hardware, improving reaction times and performance potential and that familiar 'off-screen' flicked-wrist reloading action is still as satisfying as ever.

When tackling EVL henchman it's important to keep an eye on your gun's targeter. This circular sight zooms in on designated enemy targets and quickly changes colour indicating that your foe is about to fire. If the circle flashes red and a bullet hole appears on the screen, you're been shot pal.

It's also vital to avoid hitting any innocent bystanders whatsoever as this will cost you a life and lose any special weapons. Unfortunately, the citizens of Virtua City are a bit dense, to say the least, and have a tendency to wander into the crossfire with little regard for their own personal safety. Everybody hit the deck!

The first stage kicks off with a daring jewellery store heist and also introduces Janet Marshall. She acts as your driver for the high-speed pursuit sections. You'll have a riot shooting car tyres, blasting grenade-throwing thugs, getting involved in a major pile-up and just generally causing havoc in the city streets.

Those EVL morons are up to more shifty shenanigans as they attempt to kidnap the Mayor and hold him for ransom. Set in and around the Virtua Harbour, stage two takes place within a multi-level terminal building and cruise liner. There are vile villains lurking all over every inch of this level and you'll need to keep your wits about you as masked faces are crawlking all over the place!

The final challenge initially takes place aboard a speeding train with players pursuing suspects through each carriage and even up onto the roof. The action then hots up to super nova proportions as you reach the EVL headquarters and face the mechanised might of the massive Cat-Tank. We don't want to spoil the final surprise ending just yet but we advise you to take the Saturn Way for an extra special treat...

The great thing about home conversions is that developers often add extra bells and whistles to a title to separate it from its arcade cousin. Sega has always been hot when it comes to presentation and Virtua Cop 2 is no exception.

The Saturn game now features a really cool rendered intro sequence that sets the scene for the action and excitement that lies ahead.

After seeing this amazing footage, fellow Cop 2 fan and C&VG Dep Ed Tom Guise reckons that Sega has actually stolen his idea for a weekly Virtua Cop TV show! Hmm... we reckon Sega's legal department just might have something to say about that.

The Adjust Mode enables players to manually correct their gun's aim. Use the target to calibrate the Virtua Gun. Aim for the bullseye, squeeze the trigger, check your results and then press Start to begin. Once set-up correctly there should be no excuse for poor marksmanship!

You'll no doubt be grinning from ear to ear with the thought of yet another fast-paced shoot-'em-up but blasting away at the screen regardless isn't the way to play this game. Seasoned Virtua veterans will see Cop 2 as the ideal place to hone their skills and master the 'Justice Shot', a procedure vital for racking up massive scores.

As with the original game, players can disarm gun-toting criminals with a well-aimed shot to the hand. The more points you score, the more hidden secrets and modes may be accessed...

Players begin each stage with a fairly ineffective six shot pistol but there are various extra weapons to be found often hidden in crates and other less obvious places. These include the Assault Rifle, Machine Gun, Automatic, Shotgun and Dirty Harry's best mate, the Magnum.

The rapid fire capabilities of the Machine Gun are excellent for taking out groups of EVL agents whilst both the Shotgun and Magnum make short work of even the toughest boss.

Completing Virtua Cop 2 isn't actually that tough, even when set on Hard level, but once finished a range of further options become available. We've get to discover a Mirror Mode or additional game sections, but the extras we have found are still mightly impressive.

These include the opportunity to remove the on-screen joypad target sight, switch your gun to Auto Reload, select any of the available weapons to play with (just pause the game at any time and press C to select a different gun) and out two favourite secrets: The Virtua Cop 1 Mode and Ranking Mode!

There are loads of clever little graphical and gameplay touches contained within Virtua Cop 2 and AM2 have also included sly references to other Sega games. For a start, in the rendered intro sequence, when Michael is speeding to the crime scene, who should he pass in the street but Lion Rafale from Virtua Fighters 2!

There's also a poster and massive billboard depicting VFs's Sarah as well as few other visual treats to spot. The level of player interaction in Virtua Cop 2 has also been increased and you can now shoot virtually everything on-screen from plant pots and chandeliers to watermelon slices and telephones. Finally, keep your eyes peeled for Virtua Coffee advertising plastered all over the place. Mmm... you can almost smell those roast polygon granules.

Fantastic! Just when I thought my Virtua Gun would never see the light of day again, Sega unveils the shoot-'em-up event of the year.

As we expected, Virtua Cop 2 is everything AM2 promised plus a whole lot more besides. From the smooth intro sequence and glitch-free polygon visuals to the adrenalin-pumping gameplay and stunning music, this is one Saturn title that simply oozes class.

Of course, the addition of extra features and tons of cool hidden stuff improves a near-perfect title but the game's most obvious enjoyable feature has to be the two player mode.

Grab a mate and an extra light gun and you're rocking! Even if you finish the game itself, there are still challenges to be undertaken ranging from obtaining better scores and improving your overall ranking to discovering neat secrets and extra play modes. The only minor gripe I have is that the PAL version has slight borders... but there's very little effect on the overall game speed.

There's certainly no doubt about it... with Virtua Cop 2 strengthening Sega's line-up, Christmas '97 is going to be a Saturn owner's idea of heaven!

I remember being amazed with Virtua Cop last year, it really changed our perception of the Saturn. But it looks so primitive next to Virtua Cop 2, which is AM2's latest wonder.

Everything about this sequel is bigger, levels are twice the size and have double the amount of enemies and the game seems to play twice as fast.

The settings are much more detailed and interesting and there are some crazy tour de forces: the car chase on level one being just a taster to a restaurant-wreckin' episode on a cruise liner and a train-top duel with a kamikaze helicopter.

Once again, Virtua Cop 2 highlights just what a marvellous piece of work the Virtua Gun is, as you have complete faith in the aiming and response on-screen. Virtua Cop 2 is a completely different beast from the first game in all but one respect: Saturn owners must have it.

Sound 92%
Excellent arranged tunes that not only manage to accurately heighten the atmosphere and on-screen action but also actually sound better than the original coin-op's music.

Playability 95%
Hey, it's AM2, what do you think? Perfectly balanced gameplay with progressively tougher levels, loads of hidden stuff and an amazing two-player co-operative experience.

Lastability 95%
Even if you complete Virtua Cop 2 in one sitting, the chance to increase your score and ranking status will prove to be irresistible. Plenty of secrets to uncover and multiple routes to tackle.

Overall 94%
An explosive sequel and an essential purchase. Even if you already own Virtua Cop there's just so much more to this game.

An explosive sequel and an essential purchase. Even if you already own Virtua Cop, there's just so much more to this game.