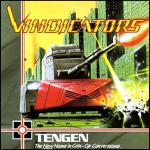 The Imperial Tangent Empire has been up to no good yet again, 18 months after the 63% Amiga version the C64 resistance gets to flex its military muscle. Two SR-88 Strategic Battle Tanks are sent in with the objective of total destruction of each of the fourteen Tangent space stations. The tanks cut a swathe through the multiple levels of each station, blasting tanks and static guns, collecting stars (for buying bonus hardware at the end of each level) and all the while searching for the key to the next level. Reach the final level of a station and the tanks have to collect as much bonus hardware as possible within the twenty seconds before the station self-destructs.

Coin-op Vindicators boasted stunning sound FX, a weird control system and was quite fun for a couple of goes. But the C64 version, while adequately programmed with some attractive backdrops and sprites, can't match this coin-op glitz and must rely on gameplay which was never that addictive anyway.

Trundling though countless overhead-view screens soon gets incredibly boring and while the simultaneous two-player mode is welcome, it can't save a game which feels so ancient.

Seeing how old the game ideas are behind Vindicators, one wonders why anyone bothered to convert it. And at cartridge prices you at least expect top-notch presentation rather than the basic stuff on offer here. In-game, the variety in colours and backdrop patterns is all very well, but isn't matched by any kind of gameplay variety.

After blowing up your hundredth tank and seventieth gun emplacement, excitement seems very far away. So, despite looking good in places, with a cute main sprite and smooth multi-way scrolling, this tired concept fails to grip. A good conversion from Domark, but sadly, not worth the wait.

Graphics 60%
Varied pattern backdrops with some above-average tank graphics but severely lacking on the variety front.

Hookability 51%
Simple blasting fun proves easy enough to get into, but there's nothing new about it to keep you hooked.