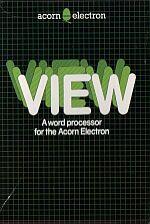 If you spend a lot of time at a typewriter, and if your typing is anything like mine, you'd be better off with a word processor. Basically, this enables you to type your letter or document directly into your Electron. The text can then be altered, corrected and manipulated very easily and then, when it's finished, it can be printed out.

Acornsoft have converted the BBC's word processor, View, for the Electron to take advantage of the Plus 1. It's a ROM cartridge which means that all of the Electron's RAM is available for storing the text.

View is selected in preference to Basic on powerup or alter a hard break. A * command such as *BASIC can be used to leave View. Peculiarly though *WORD is used to select View. Initially you are in command mode and there are twenty five commands available. NEW, LOAD, SAVE and MODE are fairly obvious. LOAD won't work with cassette, however - you have to READ it in instead.

Other straightforward commands are PRINT which prints the text using the printer, SCREEN which prints the text on the screen, and COUNT counts the number of words. The maximum amount of RAM available for text is about 16k if you have a Plus 3 disc drive and about 20k with tape or a Cumana system. This is in Mode 6.

If you like working in Mode 0 though, there can be as little as 4k of memory left to hold your masterpiece.

The amount of memory free isn't really a problem. Files that are too large to fit in the memory can easily be worked on using the EDIT command. This reads in a more manageable chunk of the text. When you've finished editing the section, typing MORE will save it and load in the next chunk of text. When you have completely finished, just type FINISH. It's really quite simple.

ESCAPE toggles between text mode and command mode. On entering text mode, you find yourself faced with a rather bewildering array of commands. There are 44 immediate commands and 23 other commands that can be stored in the text. Virtually every key on the keyboard does something. At first I was afraid to touch the keyboard for fear of destroying any text I had typed in.

Even after using it for several months, I still have to consult the function key strip supplied with View.

One of the advantages of View over some other word processors is that what appears on the screen is what appears on the paper. It's very easy to lay out the text exactly how you want it to be printed and see what it looks like. Another plus is that the text stays where it is - whenever possible - and it's the cursor that moves.

This is more natural than having the cursor fixed on a line and the text continuously scrolling up and down, as with some word processors. View works in any mode and as printers generally print in 80 columns it's convenient to work in Mode 3 if you have a monitor.

All the stored commands affect the way text is printed out. The text can be placed anywhere on the page. Left and right margins can be set and headers and footers defined. The two letter commands to do this are placed in the margin - they won't be printed out of course.

The immediate commands act, as the name suggests, immediately on the text. They are accessed by holding the CAPS LK/FUNC key down and pressing one of the other keys. The cursor can be moved anywhere on the screen and the text scrolled forwards and backwards and text can be entered in insert or overwrite mode.

In insert mode, the text is pushed along and the text inserted. In overwrite mode, text is written over what is currently at the cursor. Blank lines can be inserted and lines can be deleted with a single keypress. Lines can also be split to form new paragraphs and concatenated to join them again.

There are several commands which act on a block. To define a section of text as a block, markers are placed at the start and end. The block can then be deleted, moved to a different part of the text, copied, formatted, saved, counted, searched, changed and loaded.

View has a macro facility. This means that any section of text can be given a two-letter name. Whenever this text is needed, there's no need to type it in - just enter the name in the margin instead. This is very useful for standard letters which may have the same address and text.

My only criticisms are that it is sometimes slow in Modes 0 to 3. This isn't serious though, and is partly the Electron's fault anyway. What is serious is the total lack of any means of inserting printer control codes.

The printer must be set up before entering View. If you've entered View and loaded your text file, then there isn't any way of altering the printer settings.

It is often necessary to swap between the different styles of print within a document. The title may be in bold, the points needing emphasising in italics, and other important bits may need underlining. This is impossible with View.

There is a printer driver program available, though, but you shouldn't need a program to patch up what should've been included anyway.

Apart from these grumbles, I like View. It's easy to use, very powerful and flexible. For a straight printout it is excellent, but if you need to swap print styles within the text it isn't so good. Still, it's probably my most used ROM. Recommended.

Probably my most used ROM. Recommended.