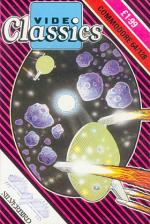 Sunday afternoons with the family 'in the old days' used to sometimes end up with everyone crowded around the TV playing 'tennis' on a crappy old video game console, whose idea of graphics was white lines and sound effects that consisted of the odd blip!

Hence the name of Silverbird's in-game latest product. This piece of antiquated video game-istry harks back to those bygone days of TV history. Included are six games - tennis, football, squash, solo squash, four-bat blip and Asterbliperoids (which is tennis in space with a few asteroids thrown in).

What the hell is the point of this? I thought we'd seen the last of games like this years ago, then people like Silverbird come up and "revive" them for the more modern machines. Well, I was bored of them a long time ago and they don't improve with age it seems, as I'm still bored of them now.

The graphics in Video Classics are still of the basic bat 'n' ball type with a few minor enhancements, and the sound merely consists of a short tune which plays over and over and over and AAARGH! Get me away from this!

This is a poor excuse for a video game, even on budget. The sub-games included were dead and buried a loooong time ago, and the only reason they were popular in the first place was because they were the only games you could get. Stuff like Pacman will keep a sort of ageless charm because it has more in the way of playability - this has just simplistic 'bouncing a ball about' content. Maybe if there had been some nicely designed graphics and atmospheric music, it may have been more impressive, but as it stands, Video Classics is not very good at all.

Presentation 31%
One or two players and a choice of six naff games.

Graphics 23%
The simple sprites and pukeworthy scrolling backgrounds are a joke.

Hookability 19%
The games included are hardly mind-taxing enough to keep you hooked.

Lastability 12%
Games like this have been boring for a long time.

Overall 15%
One of the most pointless budget releases ever.

I was bored of games like this a long time ago and they don't improve with age it seems, as I'm still bored of them now.