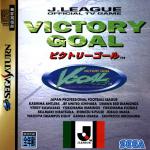 Victory Goal marks the first footy game to land in the Saturn's CD drive and, as can be expected of a machine with its processing power, features all manner of zoom modes, rotational effects and digitised interludes.

Using the current J-League teams in its line-up, the Japanese equivalents to Cantona (i.e. someone who acts like Bruce Lee to opposing fans) Giggs and... er, Gary Lineker, are all revealed in their digitised glory, as one or two players step up to control Grampus Eight or one of the other premiere teams. Pretty much all the usual footy rules apply, and Victory Goal's off-screen ref oversees fouls, off-sides and red and yellow cards. What we what to know, though, is what the Japanese for 'the referee is of illegitimate stock...'

If a new console doesn't pay host to a footy title almost immediately, then something's up. Looks like the Saturn's safe, then...

Kicka de football inna da goal. As Roberto Baggio might say When he's not missing penalties, that is.

With the Saturn boasting stunning graphcal processing power, it was always likely Victory Goal would boast rotational effects and clever panning similar to that of 3DO FIFA. During play, the action is viewed from a camera located above and behind the southern-most goal. Using the two left and right buttons on the top of the joypad, the action can be viewed from one of three zoom modes.

With the exception of an isometric perspective, though, these are only views on offer and an opportunity to emulate the 3DO game's "Ball Cam" and "Shoulder Cam" are sadly lacking.

Still, goal-scoring heroes will no doubt be chuffed to learn their moments of glory are replayed from three views just to make victory that much sweeter!

The Saturn's A, B and C buttons affect a number of kicks and headers, with the A button tonking the ball, B used to pass to the nearest player and C changing control to the player nearest the ball. However, as with FIFA on the 3DO, these moves change depending on the height of the ball and the proximity of the player.

The goalkeepers, though, are a different kettle of fish. Whilst the computer-controlled option is advised for newcomers, full control is also on offer with the player switching control to the 'keeper whenever the Z button is pressed.

Be warned though, timing is essential or you'll just assume control in time to see the ball sail into the net!

Japanese soccer differs from the rest of the world in that, if a match ends in a draw, they decide the outcome in a rather unusual way.

Whereas the European teams play twenty minutes of extra time to settle it, or a rematch followed by more extra time and a decisive penalty shoot-out, the Japanese opt for a 'sudden death' play-off.

This means that extra time is played until a goal is scored. Thus, if two teams are of equal skill, a match could very well go on for hours!

The import version of Victory Goal is endorsed by the Japanese J-League, and offers the player control over any one of the twelve teams within it. Anyone familiar with the Megadrive import version of J-League Soccer (an old office fave) will already be familiar with the likes of Grampus, Jet United and Sanfrecce, but Victory Goal takes its attention to detail a step further with the addition of digitised info on each teams' players.

This includes assorted stats regarding their control and shooting skills, and allows the player to add a very slight managerial bent by substituting and rearranging the teams.

This is a bit of a nightmare. Rumours that Victory Goal was a bit crud had circulated since the New Year, but I hardly though it would be this inept.

The scrolling and scaling are good, but there are no exciting camera angles to enjoy. Play is ultra basic - you cannot even manipulate the Goalie around the box. The CPU plays appallingly, but even human opposition doesn't create any excitement.

There are sixteen (count 'em!) teams, which makes me wonder just how insular the Japanese are. No, no, no.

I love footy games, me. Having graduated from J-League to Sensible Soccer, FIFA and Konami's brilliant International Superstar Soccer, I was eagerly awaiting this first Saturn effort. After all, FIFA on the 3DO added superb camera tricks to the original game, so surely the Saturn game would be even better?

Nope. Victory Goal is soccer at its most basic. Passing and kicking are about the only moves on offer with everything else under the computer's jurisdiction, and this makes for a tedious game of weaving and passing until you get to the corner of the opposition's box where a diagonal shot goes in virtually every time.

Control over the 'keepers is minimal and poorly devised, and very little skill is needed when effecting a tackle - simply hammer the B button until you gain possession! Whilst these are all faults levied at the 3DO game, at least EAs programmers tried to divert the player with the addition of the said camera angles.

Victory Goal offers a very stilted zoom mode which only confuses play, and the only other option is to view it from an isometric point.

This has all the hallmarks of another rushed Saturn effort, and footy fans are well advised to wait for Konami's Superstar Soccer. It won't appear for a year, but it's better than this pap.

Graphics 79%
P. The sprites are detailed, and look good when at their largest scale. Similarly, the scoreboards boast neat rendered pics and interludes.

Sound 83%
P. You can select the crowd chants to suit the teams playing, and a variety of tunes play throughout the match.
N. Unfortunately, the music is the worst thing this side of Boyzone.

Playability 65%
P. Easy enough to pick up.
N. But no real skill is involved thanks to the simplistic controls, and guaranteed scoring method.

Value For Money 44%
N. The import price is greatly inflated, making this a complete non-event. Save your money for the Cantona 'Karate For Self Defence' video!

Overall 55%
Like missing an open goal. This is a completely wasted opportunity which suffers from minimal gameplay and a lack of lasting appeal. A foul of the first order.

Rumours that Victory Goal was a bit crud had circulated since the New Year, but I hardly though it would be this inept. And the music is the worst thing this side of Boyzone.