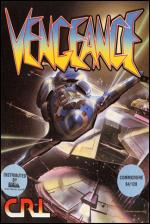 A fleet of powerful alien ships is terrorising the Galaxy, which lies submissive but for one pilot. In an attempt to inflict as much damage as possible before his inevitable demise, the solitary hero prepares to pit his own vessel against the might of the entire alien fleet.

The player is the pilot and begins his mission at the edge of the alien armada, which scrolls vertically downwards. The small fighter has a simple cannon which is effective against enemy vessels and installations, the destruction of which occasionally renders an equipment pod which is collected to enhance the ship's performance.

Available pods include added speed, increased firepower, extra ships (to add to the initial five), bonus points and energy. The last of these is required for teleporting a remote droid aboard each of the eight types of enemy ships encountered. Each ship contains a secret engine component which is required to complete the mission.

The teleport sequence is initiated by pressing the space bar and selecting "board ship" from the pull-down menu that appears. The action freezes and a cursor appears, which is used to select

Surely one of the most popular game formats in recent times is the vertically scrolling shoot-'em-up. CRL has tried to give a new twist to the story by introducing a 3D exploration/puzzle section.

However, it doesn't quite work, as both pieces of action are frustrating. The shoot-'em-up for its surprise factor - you can die in an instant! - and the puzzle for its difficulty - it's very hard to complete it within the alloted time limit.

Combine this with strangely awkward progressive weapons and some bland graphics and sound, and the game ends up with a high 'table factor' (this is the object that's violently assaulted by fist or joystick halfway through the game).

Not a fun game. Not worth the money. Not to be bought.

The latest addition to the vertically scrolling shoot-'em-up genre attempts to inject some variety into the gameplay, but only manages to complicate matters.

Vengeance is very reminiscent of Firetrack in its graphic style, but there the similarity ends. There are too many annoying aspects to make it a truly worthwhile proposition, which is a shame since the game's promise is quite substantial.

To enhance your ship, you blast icons, and quite often the pod scrolls down the other side of the screen where you can't reach it!

Alien swarms often appear without giving the player any time to move out of the way... which is infuriating!

The maze section is also incredibly difficult: the mazes are quite large, so you need to collect an awful lot of energy to stand any chance of even mapping the thing, let alone actually finding a component.

Vengeance is slightly addictive, but it's addiction borne out of frustration and the desire not to be beaten, rather than simply having a good time.

Presentation 79%
Good all round, including a restart option and large high score table.

Graphics 78%
The colourful backdrops and sprites are let down by a poor main ship.

Sound 56%
Average tune, but the spot effects are fairly good.

Lastability 44%
Frustration should arrive long before the end of the game.

Overall 53%
An uninspiring and infuriating shoot-'em-up which fails to realise its potential!

An uninspiring and infuriating shoot-'em-up which fails to realise its potential!