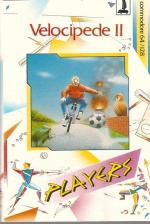 Mr. Megafat has always been a fat, wobbling lump of lard. But at least he's a happy fatty. One day he visited the doctor to get his athlete's toenail cured, and during the course of his examination the doctor remarked that Mr Megafat was very, very overweight. The doctor diagnosed that if Mr Megafat didn't lose weight as soon as possible, he would keel over and die of a heart attack before the end of the week! Gasp! So shocked was Mr Megafat that he bought a unicycle and started a strict and strenuous fitness course. This is where you come in...

Velocipede II is a one-way, horizontal scrolling game in which you play the role of Mr Megafat on his quest to fitness and a slimmer waistline. Unfortunately, the land he lives in is a strange one, and isn't really suited to a cyclist. Consequently, his little jaunts in the countryside are fraught with danger. Luckily his bike, the Velocipede II, is fitted with the latest in plasma cannons which can destroy anything that gets in his way.

When the game starts, Mr Megafat trolls out of his house and mounts his trusty unibike. The screen scrolls from right to left and you have to guide the jelly-like character to his destination. His velocity can be changed by moving the joystick right or left, and he can be made to jump by pushing forward. Along the route there are many hazards, both animal and geographical, which have to be avoided. Holes in the road and creepy crawly creatures can be jumped over, and anything bouncing along at head height can be disposed of by shooting it with the plasma gun.

If the fatty is stupid enough to fall into a hole in the road, he loses one of his four lives. Crashing into a creature, however, increases a damage bar graph, displayed at the bottom of the screen. When the damage bar reaches the end, a life is lost.

There are four different routes, each a set distance in length, which have to be completed before you can tackle the first one again.

Gary! Gary!! Gary!!! I've completed my first Commodore game! - and let's face it, it wasn't exactly difficult. This game was obviously designed with bad players in mind; after four minutes I had it sussed, just hurtle along and jump occasionally, and you've cracked it. The game is a great idea - a sort of Moon Patrol on a unicycle - but it's just too easy peasy. Still, who cares, the first game I've completed on the C64. Now where's the Scorelord...?

This would have been quite a fun game if the four courses were longer. As it stands, it's totally ridiculous. Not only are the four levels no more than a few screens long, but getting through them involves very little skill. The graphics are quite nice and the sound isn't bad at all, but the game is virtually non-existent.

A shame when you consider the quality of the other two programs in the Players' range. Avoid it, unless you want to waste a couple of quid.

Lastability 27%
Four levels which are ridiculously easy to complete.

Value For Money 42%
Cheap at two quid, but there's not much game for your money.

Overall 36%
A nice idea, let down by poor content.

A nice idea, let down by poor content. The four levels are simply ridiculously easy to complete.