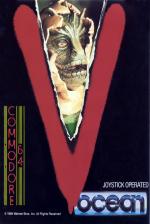 The V stands for Visitors and these reptilian aliens are not welcome. Based on the TV series of the same name, the idea is to find the key points on the ship, set explosives and escape before the whole thing goes bang.

Diana's Mothership in not a healthy place for a human. As Donovan, your first problem is to work out how your Communiputer works. This is essential from the very beginning because you start off in the Docking Bay trapped between two force-field doors which will not open until Donovan is given the correct code via this device.

Once inside the ship, there are fifteen levels and five sections to search through to find the five vulnerable locations for your explosives. Diana's robots are on the prowl however, some shoot bolts of high-voltage static, some report your position to Central Control while others go about their task of cleaning and maintenance without paying attention to you. All are highly charged with static which will put a strain on Donovan's heart if he touches them.

The Communiputer's central display is a cardiograph trace of Donovan's heartbeat which quickens with each shock. To preserve his lifeforce he must rest after several jolts to allow his heart to recover or the trace will reduce to a straight line with his mission incomplete.

Apart from the ship's key points, there are also several laboratories which harbour the formula for the Red Dust which is lethal to the aliens. Injecting Red Dust into the Air Purification Plant kills off a large proportion of the aliens and this causes the robots to slow down their persuit of Donovan increasing the likelihood of a successful mission.

The Central Computer is linked into the communiputer which not only gives warning of alien action but also lets you know where you are. In fact, mastery of this little device is essential because it also helps to crack the security codes which open the doors to each section and recharges Donovan's laser which forms his only means of protection.

One major problem is that all of the devices, including the Communiputer are alien products and incorporate alien operating symbols. This does not make the task of setting explosives easy. The aliens obviously usse a quaternary numbering system and your guess is as good as mine as to their concept of time.

Access to a new level can only be obtained via a beamer pad which are much in evidence along the ship's corridors but access to a new section requires the correct code before the door will open.

Much of the game is spent wandering through the corridors of the Mothership in a search for a key area or a laboratory. A pen and notepad is essential to remember where each bomb is to be planted and care must be taken not to set the explosive too early or in the wrong place. Each charge is operated by a timing mechanism which cannot be stopped once the countdown commences. For this reason, the locations must be found before the first bomb is set otherwise Donovan will not have time to escape.

Although I thought that the TV series was pitched at the level of Star Trek meets Crossroads and Dallas, the game is a vast improvement on this. The concept and execution of the program places it in the same category as Impossible Mission without the voice synthesis. If you enjoy solving puzzles while zapping aliens, this enjoyable game is a must for your collection.

If you enjoy solving puzzles while zapping aliens, this enjoyable game is a must for your collection.