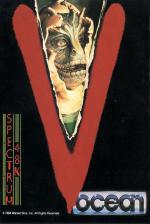 The visitors command ship creeps through a slow steady orbit high above the planet earth.

V, the fantastically successful TV mini-series is back in the form of the game-of-the-film from Ocean. The ratings-topping science fiction pulp pap - a wonderfully redundant mix of Star Trek and Dynasty mashed into a confection of reptile aliens, tangled romances, betrayal and live rodent eating - is perfect micro game material.

If you want to save the world Donovan's your man. This anodyne hero with the Colgate smile can do it. The kind of guy you could believe in to save the human race.

As Donovan you are thrust unceremoniously into a random point in the alien ship's architecture: the plane, level and sector are set by the computer. You carry a laser gun, explosives and a device call a communiputer, giving status info on ship-board activity.

Once you've got your bearings you can move up and down between levels using beamer pads, which look like the tops of toadstools. Most of those will allow you to travel in only one direction, either up or down. Each level is split into sectors, some of which are protected by security doors, and the ship is bustling with a robot population keen on removing you from their environment. Attack is the best form of defence and your laser gun proves invaluable. You only have a limited number of shots though - the fire-power remaining is shown as the first thin bar on the status panel - and gun performance is affected by the electromagnetic fields of the robots.

Four classes of robot patrol the levels. Maintainance robots travel along corridor floors while cleaners float above head level. Neither do much damage but if you bump into them your power decreases. The killers of the V ship are the security robots which are armed with lasers. You should take them straight on but you can jump over them and roll to the ground by pushing the joystick up. In that way you can avoid touching the robot and dodge its deadly firepower.

The ship also supports surveillance robots which report your location to Diana, the reptile leader. She will send yet more robots after you so you should silence their inaudible chatter before they get a chance to squeal.

Your primary objective is to destroy the ship. You must set explosives at the water inlet, air purification plant, central computer, nuclear reactor and docking hanger. You can set them in any order but once you have typed in the current time on the detonator you have only 30 minutes before the explosion. In that time you have to set the other charges and escape safely.

Time on the spaceship is confusing: all numbers on the craft are displayed in the reptile numeric system.

The clock which continuously ticks away on the status panel is split into six sectors, two of which are continually up-dated while the other four rotate as time passes. Pretty soon it becomes obvious that six characters depict hours, minutes and seconds. If you safely reach one of your targets - such as the reactor - you prime your charge by fixing the time on the detonator to that of the first four digits of the current time. Detonators are set by pressing down on the joystick which puts the communiputer into operation. A keypad appears at the bottom right of the screen and the main status display, bottom left, is cleared. There are 12 icons on the pad which are operated using an arrow cursor. The first two columns invoke actions such as detonators while the others are marked with the characters of the reptile number system.

To set the explosive device use the icon in the second row, second column.

Your secondary mission is to find the formula for the red dust which kills the reptile aliens. Laboratories on each level of the ship contain a piece of the formula for red dust manufacture. Somehow you will need to find the security codes for the levels where the labs are to have a chance with this sub-mission.

The five pieces of the formula are picked up by pressing the second key in the first column of icons. To get to them, however, you must switch off the security circuit on the lab's level in order to get through the security door - you cannot get into a lab using the beamer pads.

Invoke the security pass system using the icon pad and a series of six tumblers appear in the status window. Each of those tumblers must be rotated so that they each contain the same symbol. The icons which, until now, have been used to choose alien numbers can be used to rotate the tumblers in various patterns.

Only with great difficulty can the sequence be set but to get the formula you will have to master the technique. For a start you will have to make a chart of the tumblers each icon controls. I can assure you that, though it's pretty devious, it is possible - I've done it.

That's all there is to it! Avoid being killed, plant the explosives and piece together the secret formula. And the best of luck - Ocean has some fiendish minds lurking in its gameplay development department. Assuming you do manage to achieve your targets (I only managed two charges - at the lab and at the water inlet), hanging around is not recommended. With your explosives about to blow a rapid vacation of the scene is in order. Find the Transit Out bay - its location can be discovered from the icon control pad - and beat a hasty retreat. As you get nearer to escaping, the robots become frenetic in their activity trying to hunt you down.

Initially, I was quite put off V by the lack of instructions. I had no idea what was going on to start off with, and apart from the stunning graphics I didn't realise just how clever the game is. The status displays seemed baffling and I had great trouble with the icon panel.

Then slowly I was hooked and drawn in. Frustration turned into a determination to suss it all out and I was converted. Easily one of the better movie spin-offs.

And by the way, a third TV series is apparently on the way, going into production later this year.

At first, the status displays seemed baffling and I had great trouble with the icon panel. Then slowly I was hooked and drawn in. Frustration turned into a determination to suss it all out and I was converted.